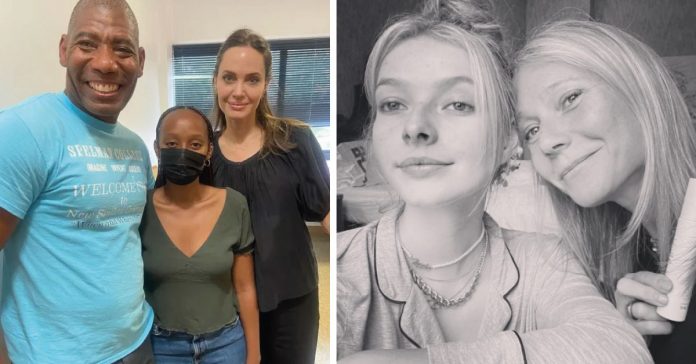 Having a child involves many sacrifices and responsibilities, parenthood is full of pressure from society and expectations of how to be the best parent or set the best example.

The children of Hollywood celebrities have always been under a magnifying glass and it seems that their parents must have a magic formula to educate them, although many times they have been judged for their atypical decisions in relation to their upbringing.

It is important to know that today, motherhood is completely different from what we understood a few years ago and that it is something totally personal. Perhaps it is for this reason that the following celebrities decided to opt for something different and show a different side when raising, educating and supporting their children.

The actress is the mother of 6, for several she was by Brad Pitt’s side but for a couple of years, she has had the role of being a single mother and so far she has done fabulously.

With none of his children -biological or adopted-, he has made distinctions, on the contrary, he has always encouraged them to get ahead on their own, to study what they want, to finish a career and even to work.

Two of her daughters have shown that what their mother taught is paying off, as they have not let Jolie’s fame go to their heads, to the point that Shiloh prefers second-hand stores over luxury brands.

Zahara, for her part, has decided to pursue a university career and hopes to become a United Nations Goodwill Ambassador.

The daughter of Gwyneth Paltrow and Chris Martin: Apple.

Although their relationship did not prosper, singer Chris Martin and Gwyneth have always shared a good relationship and have raised their children in the way they have seen fit.

Her young daughter, Apple, has learned the different values ​​of society since she was little, making her a responsible and humble girl. At some point, her father discovered her working in a clothing store.

Although he has a good inheritance and fortune, Apple has been working since he was 15 years old and has wanted to get ordinary jobs.

The children of Mila Kunis and Ashton Kutcher

That is why Mila and Asthton are very clear that the two little ones are going to learn at a very young age that they always have to keep their feet on the ground and learn to forge their own path.

With an estimated value of 170 million dollars, the famous parents have declared that although their children will be financially protected, part of their inheritance will go to charity.