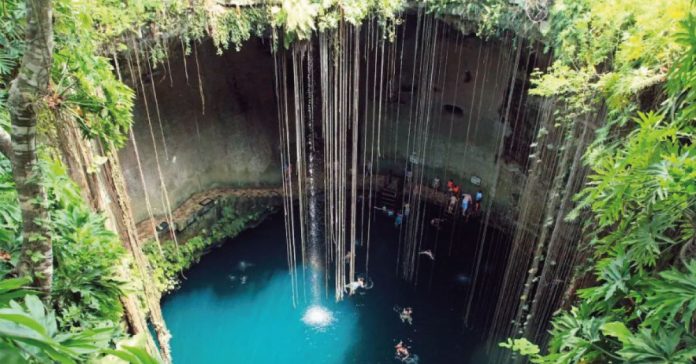 The cenotes are one of the great wonders that Mexico has, with many years of history, Yucatan is the state that has the most cenotes, there is a record of at least 2,400 that are interconnected with each other.

It is necessary to define that they are a natural phenomenon, before they were known as ts’onot , a Mayan word that literally means “hole” or “hole in the ground”.

They first appeared documented in the 16th century, however, they did not begin to be explored until the late 19th and early 20th centuries. They were believed to be portals to enter the kingdom of Chaak, the Mayan god of rain and life .

In ancient times, people believed that after death, you had to go a long way to Xibalba , a mythical and supernatural place, located between the earth’s subsoil and underwater.

Due to its layout and characteristics, it is common to find archaeological remains in a great state of preservation and this has increased its historical and biological importance.

However, megaprojects promoted by the state – such as the Mayan train – seriously jeopardize their status. Despite being under the observation of several experts and researchers, very little is known about the cenotes, despite being considered one of the most complex aquifer systems in the country.

In simple words, it can be said that they are a reservoir of spring water located in geological depressions. The rain is the main generator of the cenotes, since its precipitations wash away the limestone rock that, over time, generates a system of underground caverns.

“Its waters, exposed to a greater or lesser degree to the prevailing environmental conditions on the peninsula, provide a peculiar environment in which unique life forms have developed,” write biologists from the Department of Ecology of the Autonomous University of Yucatan.

The phenomenon of limestone is the “culprit” that the cenotes of the region communicate with each other. Above your sauna, certain types of fish and crustaceans are known to live there.

Another thing that must be taken into consideration so that it is possible for life to inhabit a cenote is its age and morphology.

About its classification, so far 4 types are known: the semi-open or pitcher-shaped, the open free-fall, the old or watery and the cave type.