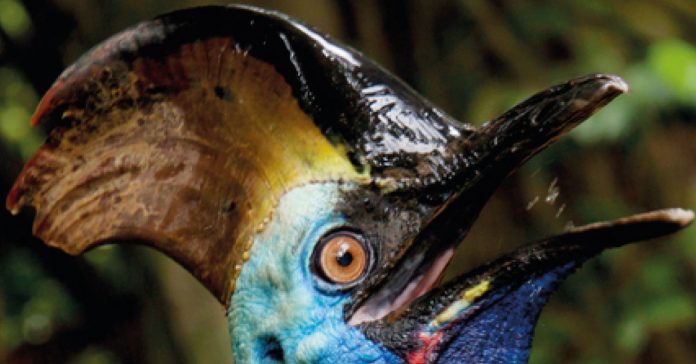 A different and solitary species, a mix between an ostrich and a peacock. Cassowaries are a genus of birds in the family Casuariidae that are distributed in Australia and New Guinea. They cannot fly, despite their appearance, and although they can be considered exotic birds, it is not advisable to approach them.

They are usually always in cool places such as the humid forests of New Guinea, they are characterized by their speed when dispersing the seeds of the fruits they consume, they contribute enormously to the plant diversity of their habitat.

If they are not confronted or cornered, they are calm and peaceful animals, they rarely attack but when they do, their almost 10 centimeter claws are very dangerous, in fact, it is very likely that they will finish off their adversary without effort or with a single kick .

Although they are mainly on various islands north of Australia, their greatest presence is in New Guinea. Even in captivity, keepers themselves have warned visitors of the bird’s dangers.

Its history is quite interesting, there is a record of three different types of cassowary. The smallest species weighs up to 22 kilos, while the largest reaches 70.

They live in mountains or humid forests, their complexion allows them to be in both and they have managed to trace a common ancestor that dates back to prehistory. Among other characteristics, they are excellent swimmers, they run 50 kilometers per hour and their strong legs allow them to jump very high.

Their claws are what make them the most dangerous birds on the planet, they can pierce almost any surface, from the ground to the armor of small animals.

The cassowaries are species of care, although they can impact due to their rarity, it is necessary to give them space and never try to invade their habitat.