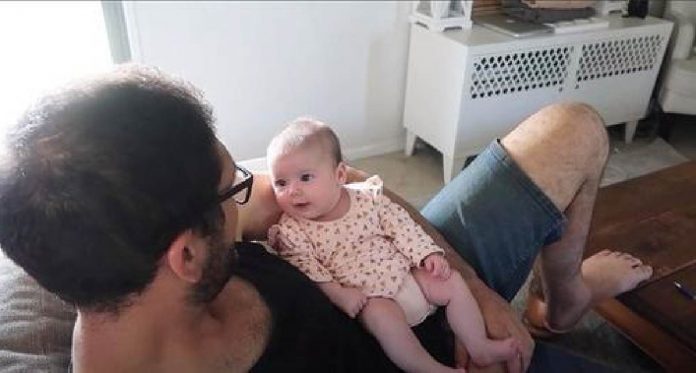 In the end, moms aren’t the only ones who can develop a unique bond with their children.

We cannot deny that having children comes with a lot of new experiences. For first-time parents it is a new world full of challenges every second, for parents who are having their second or third child it is a moment of decision, where you put your previous knowledge into practice and develop your skills. But within fatherhood not everything is a constant challenge, it also comes with touching and memorable moments.

Things like your first steps, trips together, spontaneous actions or your first words. All these things and more are facts that you will keep in the trunk of memories and treasure with love.

In January 2020 a video shows us a very special conversation between Zac and his little 2-month-old Arabella.

The baby is at that stage where children learn to make sounds and babble, and her father Zac loves to hear her. In her video, her father is seen holding her in her arms while he listens carefully and responds as if he knows what the baby is saying.

The video was posted on YouTube and currently has more than four million views and almost a thousand comments. Arabella’s mother, Sophie, captioned the video: “Last night I caught the sweetest moment between Arabella and Zac. He just started ‘talking’, and he’s too adorable.”

Now, while it’s common for babies to develop a stronger bond with their mother, it’s not uncommon for them to have a better connection with their father. An article in Parents says that men also experience biological changes when their children are born, and that helps them prepare to be fathers. “Fathers are endowed with parenting abilities comparable to those of mothers, and their bodies change as well. Hormones skyrocket during and immediately after pregnancy, but men can also experience significant hormonal changes that prepare them for fatherhood,” the article states.

The way Zac connects with Arabella is proof that mothers aren’t the only ones who can form special bonds with their children. It’s clear that Zac enjoys being a father and Arabella seems completely happy.