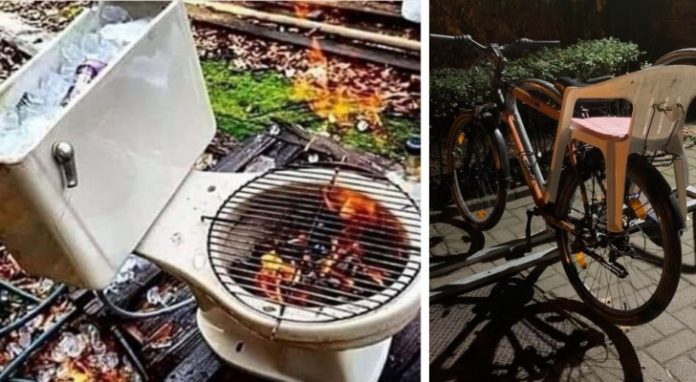 Often we tend to become so attached to an object that we don’t want to separate ourselves from it, not only because of the object itself, but also because of the meaning behind it. It can be something given to us by a loved one, which is why we always want to have it with us.

But like all things, objects can also get damaged, so in order not to throw them away and give them a new life, we try to fix them as best we can. There are people who show enormous creativity and manage to restore the product in an amazing way, giving it, in some way, a new beauty.

In other cases, there are those who see solutions where there are none, giving objects another existence. Managing to come to terms with what you have , in fact, is a real art that allows you to find the most original alternatives, here are 16 times when the alternatives found may seem questionable, but they are certainly functional.

His shelf broke and he looked for a way to replace it. He had a bar and with some ropes and shelves he made new shelves. It may not look pretty, but it sure is functional.

He bought a back scratcher, but after using it once, the wooden stick broke. He had to find a solution immediately and seems to have succeeded. With adhesive tape, he joined the two parts, again, into one.

Suddenly, the helmet breaks. At this point, the options are to buy one or repair it. He chose the second option. You can see how he created a chassis to be able to use them again.

He found a way to be able to wear his favorite jeans again. They tore apart, but he tied the two parts together with twist ties. It certainly started a new fashion.

The bench broke, we had to find a solution. This way it will be much stronger.

He needed a vase and he had half a tire left. So he decided to combine the two, to make something special and extravagant.

Her glasses had broken and she had to quickly find an alternative, otherwise she wouldn’t have seen anything all day.

He had an extra toilet and chose to make the best use of it. Not only did he exploit his form to barbecue, but he used the tank as a cooler, to chill his drinks.

It was his favorite piece, he chose never to part with it again, making it an integral part of his pants. He created a hole and turned it into a button.

He absolutely needed a button, otherwise he wouldn’t be able to open the drawer. He found this Coca-Cola cap and gave it a new function.

It’s nice to get around on a scooter, but standing for a long time is definitely tiring. The best solution was found by mounting a stool. After a while it is possible to sit down.

If the garage is too small and the car needs more space, no problem: just make a hole in the flap.

A rather unusual lampshade, the important thing is to be careful not to touch it.

When you’re so attached to your car that you don’t want to get rid of it. So why not take some lime and bricks and make a wood oven inside.

Since there was no cabinet to support the sink, they decided to use a rope. A new type of suspended bathroom.

He had to find a way to carry his son with him, but he didn’t have room on the back of the bike, so he used a plastic chair.

What equally original solutions have you already seen?