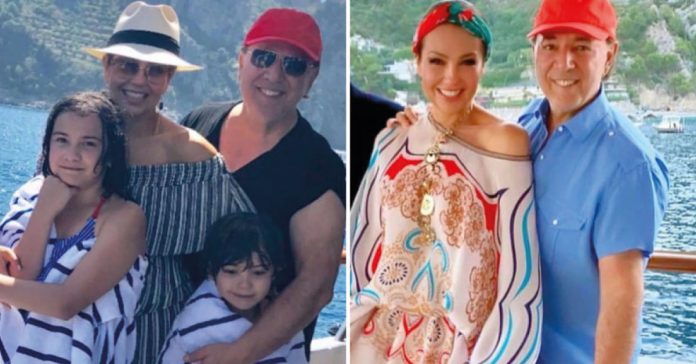 Despite the fact that the singer is 23 years younger than her husband, they maintain their love with the unconditional support they offer.

When love knocks on people’s doors, nothing else matters but happiness. On December 2, 2000, Thalía said “I do” before the altar to Tommy Mottola. The 29-year-old singer married a 52-year-old music producer who had stolen her heart. Despite the fact that she is 23 years younger than him, they are already celebrating 22 years of being happily married.

After 2 failed marriages, Mottola knew that the third time was the charm. He first of all married Lisa Clark, to whom he was married for 19 years. Later he tried again with Mariah Carey for 5 years until the love ended. A year after her breakup in 1999, he met the Mexican singer and apparently she totally impressed him because they are still in love.

Although at first the great age difference gave rise to many rumors about the reasons for their union. Some claimed that it was a marriage of convenience, since Mottola was the CEO of Sony Music Entertainment and that the divorce would come in a few years.

They both met through a blind date that their friends Gloria and Emilio Stefan organized for them in New York, United States. The goal was for both of them to give each other a chance in love.

When they saw each other, they fell in love immediately, and then swore eternal love to each other in the Cathedral of Saint Patrick, in the same city. They now have two children: Sabrina (15) and Matthew Alejandro (11).

She has told what the keys have been to keep her marriage as solid as it was 22 years ago, since age was never a limitation to love each other. In an interview for the Ventaneando program in 2020, she explained that the success of love is because they show each other “without masks and without anything, without pretensions or anything.” In addition, it is vital to support yourself at all times.

This Friday, December 2, Thalía dedicated some emotional words in an Instagram post for her happy married life.

“22 years of love and complicity. My love, I love you deeply, I admire you, I celebrate your life. I love your way of being, inexhaustible, creative, unstoppable. I love your commitment to our family, your love for me 💕. God bless you, my love, and for many more years of happiness! Happy wedding anniversary my love ”, shared the interpreter of“ Brown skin ”, wrote Thalía on her Instagram.

But she was not the only one to spend words, as Tommy expressed himself on the same social network: “The best day of my life! Happy anniversary to my one true love! you are my shining star ⭐️every day you bring me light, love, happiness and everlasting optimism, and a nice “Good Morning”.. to enliven my happy daily attitude from BRONX 😬😂❤️❤️I love you deeply in my soul, and it will be for eternity! I LOVE YOU forever… My CUCO”.