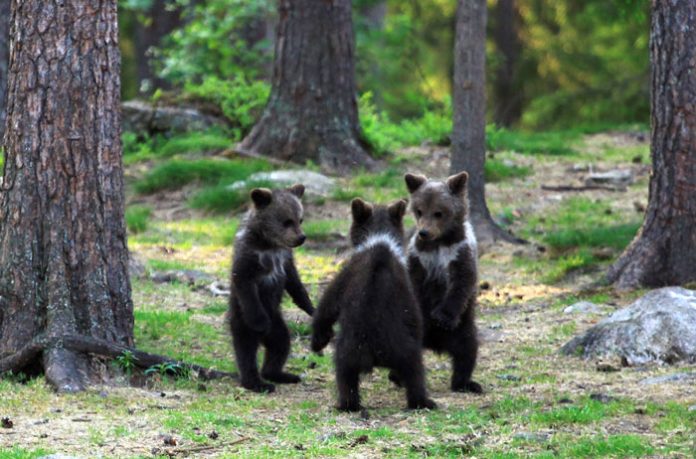 A teacher spot bears dancing in the woods and it’s like something out of a fairy tale as it was so magical.

Valtteri Mulkahainen from Sotkamo, Finland, spends his free time to photography. Valtteri has explored his country’s vast wildlife and captured many of the special moments on camera for over six years.

Valtteri wanted to explore the Finnish taiga around the town of Martinselkonen on a warm sunny day in June. The gym teacher noticed a bear coming into a clearing with a few small cubs when he was canvassed the area.

Valtteri said, “The cubs behaved like little children. They were playing, and even started a few friendly fights. I felt like I was on a playground in front of my house, where small children frolic around. That’s how much they reminded me of little children. At one point, the three of them got up on their hind legs and started pushing each other. It was like they were dancing in a circle.”

Valtteri was 165 feet away in a shelter had the perfect view. “I photographed the cubs with the bear all evening and all night.”

The bear cubs are strong and agile. They’re able to move all over the place using their forelegs very effectively. They can climb trees, swim in rivers and streams and run up to 30 miles per hour as an adult.