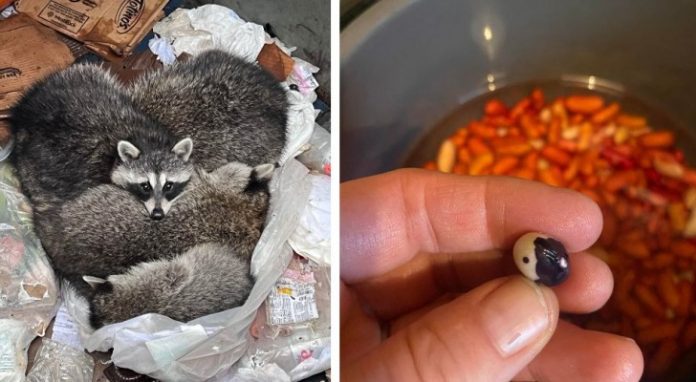 We live our daily lives in a hurry, at the mercy of our thoughts and a thousand things to do, and often we are not even aware that an elephant is passing by us, so what about the small details. This is why we often have the impression that our days are linked together, in a monotonous routine that ends up tiring and boring us.

On the other hand, all it would take is a day lived more consciously, without paying too much attention to the commitments that await us or to the thoughts that clutter our minds, to observe the world with a more attentive and more critical gaze and rediscover surprise. Shapes that remind us of something, objects in unusual positions or in unexpected places, footprints and signs of the passage of animals or men before us: there are many things that can leave us speechless. gaping in astonishment. We show you below 16 photos that prove this claim.

How many times have we looked at a cloudy sky! Have you ever seen a rainbow in the clouds?

Stones can give us truly striking images and this opalite is a splendid example: if you look at it against the light, its streaks make it look like the planet Jupiter in miniature.

If you stop to look at your neighbor’s vegetable garden, you might come across something really out of the ordinary. Look at this pumpkin, it grew right over the trash can fence.

Buying second-hand clothes could open a window into the lives of the previous owners: someone found a movie ticket from 1997 in a pocket.

5.A heart in the dumpster

When throwing away the garbage, we hardly ever glance at the dumpster. Still, you might find some remarkable surprises, like this family of raccoons who huddled together to form a heart shape amid the trash.

Buying a cheeseburger and discovering that cheese is just a faded memory.

Walking down the street, we come across all sorts of irregularities on the floor; how often do we notice a manhole cover positioned the wrong way round?

In this small cypress, the needles have only partially dried, creating an almost perfectly symmetrical division.

With this clip to fix it to the wall, it will certainly be very useful when needed. You only realize this by observing it carefully.

You get up in the morning in a hotel room and, eyes still half closed, you go downstairs to have your breakfast. You excitedly notice a wonderful honey dispenser attached to… is that a beehive?

A funny road sign in the Philippines warns of the possibility of encountering animals crossing the road.

12.The Prank That Isn’t There

You manage to squeeze in a few minutes for a snack and grab that chocolate snack from your kids’ breakfast cupboard; you bite into it with mad envy and… it’s empty.

The cat’s ears become transparent against the light, revealing a card inside; will she point out where the treasure is hidden?

Finally, it’s snack time, why not have a good banana? Or maybe even two.

Soak beans and find a tao bean in the middle.

This pumpkin must have seen the seasons go by… his beard has even grown!

How many things a closer look at them leaves us perplexed! Has this ever happened to you?