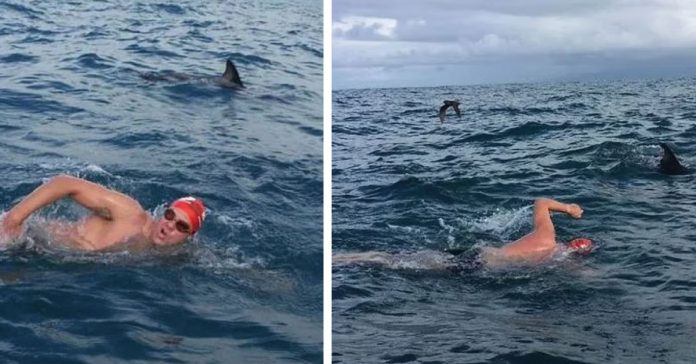 A couple of years ago, the open water swimmer made a splash again. After several years, accumulating records and milestones for his personal history, Adam Walker added an incredible experience by swimming with dolphins.

Nowadays, it is very easy to swim with these wonderful creatures, in many aquariums they offer this type of services or amenities, however, nothing compares to the sensation of doing it in the ocean and more so when it is as natural as what happened with Walker.

The Briton dove off the coast of New Zealand to complete the 16-mile Cook Strait, the goal being to swim across.

Shortly after he started, a pod of dolphins approached him and they started swimming together. For a long time, everything seemed completely normal until a great white shark appeared a few meters away.

“I looked down and saw a shark a few meters below me. I tried not to panic as I have a goal to swim across successfully.”

Where anyone else might have panicked or had no idea how to act, Walker was shocked to feel protected by none other than the mammals, who formed a protective ring around him.

“I can’t say if the dolphins came to my aid as a pod as they can’t talk to me, however I can say that after a few minutes the shark disappeared and the dolphins stayed with me for another 50 minutes which was a treat. An incredible experience”.

The previous work of a swimmer and adventurer like him is to investigate the weather conditions, the types of animals that he can find on the way and also all the security that he has to accompany him to achieve his mission.

In fact, before embarking on his journey he had been told that there would be no sharks near the coast, so it was quite a surprise for Walker to come almost face to face with one.

Despite the shocking situation, Walker acted like a professional and never panicked.