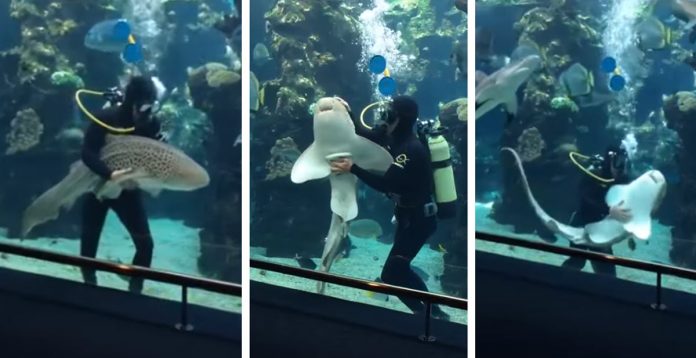 Zebra sharks can be found throughout the tropical Indo-Pacific. They are a species of carpet sharks. They are mostly around sandy flats and coral reefs as deep as 203 feet. The adults have a cylindrical body with five longitudinal ridges going down it which means they are distinctive in appearance. One of their main features is that they have a caudal fin that comprises nearly half their total length. Typically, they have a dark-spotted pattern on a pale background. Young zebra sharks that are less than 20-35 inches long are different from others. They have light vertical stripes on a brown background and they don’t have their ridges.

Adult zebra sharks can grow up to 8.2 feet long. They are nocturnal and they mostly rest motionless on the floor of the ocean. They hunt actively for small bony fishes, crustaceans, mollusks, and sea snake3s at nighttime. They search for them in the crevices and holes in the reef to find their food. They’re solitary for most of the year and form large seasonal aggregations. The females produce a dozen large egg capsules. Then they anchor these to underwater structures with their adhesive tendrils.

This shark is not harmful to humans and they actually do very well in captivity. They’re popular subjects for public aquariums and ecotourism dives because they’re innocuous to human beings. According to the World Conservation Union, the zebra shark is endangered worldwide due to the commercial fishermen, who use these beautiful sharks for fins, meat, and liver oil.

An affectionate zebra shark can’t stop seeking out belly rubs from the diver who is cleaning the inside of the tank in the video below. It nuzzles up to the man, asking for attention. The diver stopped his work for a while and gives the guy some delicious little belly rubs.