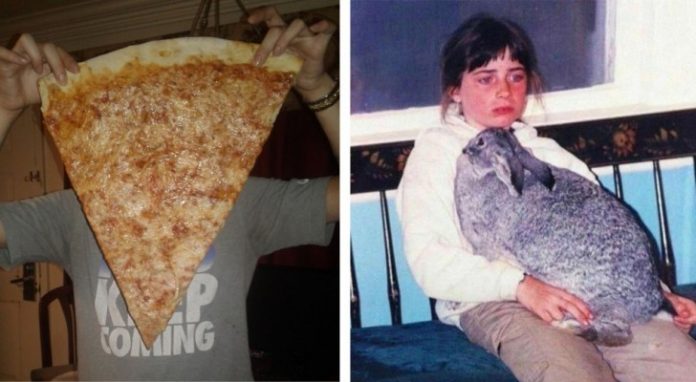 Whenever an object, a fruit or an animal is mentioned to us, with our eyes closed, our mind does not ask questions and immediately creates an image of it. He knows what shape to associate it with, but above all he establishes a size and weight, based solely on reality and his own knowledge.

However, there are always exceptions and expectations are turned upside down. In this case, you will find yourself in front of something which, by its shape, its color and, if it is something to eat, by its taste, reflects what you know, but whose size will be unexpected. Here is a list of 17 objects that are incredibly larger than normal.

This little girl wanted to take her rabbit, too bad he’s bigger than her… Apparently he has a good appetite!

Just the leaf of this tree is as big as its torso. Judging by this detail, the tree should be gigantic.

Truly gigantic pants, more than a garment, they look like curtains.

This squirrel, when it jumps from one tree to another, certainly does not go unnoticed. However, he must be very careful about the branches he chooses if he finds one that is not very thick and risks breaking under his weight.

A bar almost as tall as him. With such a piece of chocolate, one could feed an entire family. Hopefully he won’t eat it on his own.

This cat is so big that he looks like a three-year-old child. It is as big as the girl’s entire torso.

An exotic fruit. An avocado is generally short in stature; this one is bigger than the face of the person who bought it. Who knows how many avocado toasts she’ll be able to make.

This cat is really giant, his bed must be huge. At night, he must surely sleep on a double bed, just for him.

A slightly large crystal, this gentleman who has found a gigantic precious stone will be able to make many rings.

It almost looks like a blanket. This pizza could cover it all. To eat it all, it would take several hours. If it’s just a slice, who knows how big the whole pizza is?

Usually the blueberries are very small, about the size of a candy, but these seem to be excessively large. Two occupy the whole hand.

Its excessive size makes it difficult to understand what it is, but it is indeed a mushroom. It can be used as a condiment for pasta for many people.

This dog is much bigger than his master. Two of them fit on the couch. It’s probably his bunk. The master could almost ride it.

This jackfruit is bigger than its head, it will never fit in a bag. Above all, whoever wants to buy it must be extremely muscular to bring it home…

It’s like reliving the tale of “Jack and the Beanstalk,” except in this case it’s a sunflower. Who knows if climbing it will lead to a fantasy world where you can find the goose with the golden eggs.

In the morning, when you can’t get out of bed, you need a cup of coffee this size. It contains so much liquid that it could quench the thirst of an entire city.

Giant red potatoes. Who knows how many gnocchi (typical potato pasta) you can make with it?