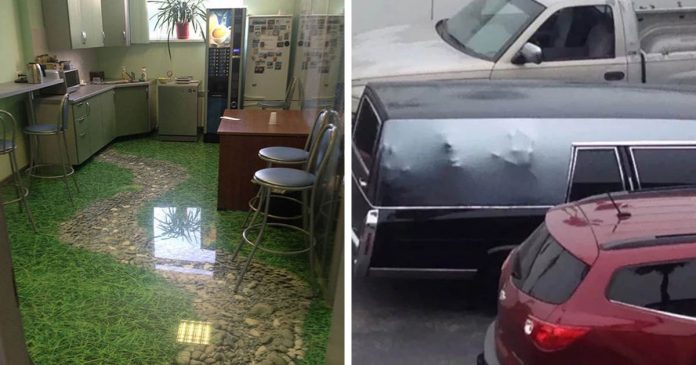 Anyone can learn any skill, but it usually comes pretty crappy if you do it without any passion. The execution itself seems to be perfectly done even if crappy as it may turn out like the meme “Task failed successfully”.

We have a list of gaudy, tacky, overdone, tasteless design fails but done inspired by the subreddit Awful Taste But Great Execution. You will wonder whether to love or hate these funny things. Here is a list of the worst fails of aesthetics from dog slippers made to look exactly like the client’s pet to a car with full chrome bodywork. Scroll down to check out all the photos.

Dwight Furrow wrote on 3 Quarks Daily, “Since most people cannot say much about why they like something, it seems as though the good taste is just the ability to identify a shared preference, nothing more. But looked at from the perspective of artists, musicians, designers, architects, chefs, and winemakers, etc. this answer is inadequate. It doesn’t explain why creative people, even when they achieve some success, strive to do better. If people find pleasure in what you do and good taste is nothing more than an ability to identify what other people in your social group enjoy, then there is little point in artists trying to get better, since the idea of “better” doesn’t refer to any standard aside from “what people like”. So it seems like there must be more to good taste than that.”

As artists and critics often produce unconventional judgments about what is good and what is a bad idea, good taste can’t be solely a matter of having a sense of prevailing social conventions. When you have a good taste, it often involve knowing what is truly excellent or of genuine value, and it may have little to do with social conventions.

Saw This Car Filling Up At A Gas Station In Illinois And Did A Double-Take. The Top Tires Spin Too!

Philosophers have tackled good taste too. “David Hume, the 18th Century British philosopher, argued that good taste involves “delicacy of sentiment” by which he meant the ability to detect what makes something pleasing or not. In his famous example of the two wine critics, one argued that a wine is good but for a taste of leather he detected; the other argued that the wine is good but for a slight taste of metal. Both were proven right when the container was emptied and a key with a leather thong attached was found at the bottom.”

Good taste was roughly what excellent blind tasters have—the ability, acquired through practice and comparison, to taste subtle components of a wine that most non-experts would miss and pass summary judgment on them according to Hume. “The same could be said of the ability to detect subtle, good-making features of a painting or piece of music. The virtue of such analytic tasting of wines is that the detection of discreet components can at least in theory be verified by science and thus aspires to a degree of objectivity. Flavor notes such as “apricot” or “vanilla” are explained by detectable chemical compounds in the wine. The causal theory lends itself to this kind of test of acuity since causal properties can often be independently verified.”

A wine taster can identify a whole bowl of various fruit aromas wafting from a wine, pronounce the acidity to be bracing, and the tannins fine-grained but firm and still have said little about wine quality. “Wine quality is a function of structure, balance, complexity, and intensity supplemented by even less concrete features such as deliciousness, power, elegance, gracefulness, or refreshment. None of these features can be detected by analytically breaking down a wine because they are inherently relational, just as describing a painted surface as garnish or a piece of music as lyrical would involve relations. No single component can account for them; it is a matter of how the components are related. In wine, even a prominent feature like acidity is not merely a function of Ph; perceived acidity differs substantially from objective measures of acidity and is influenced by the prominence of other components such as sugar and tannin levels. None of these relational properties seem amenable to scientific analysis. I doubt that gas chromatography can identify elegance; a wine’s balance cannot be appreciated by measuring PH and sugar levels.”

Any Van Gogh Fans Around?

According to Furrow, identifying these aesthetic features involves a holistic judgment, not an analytic one. “The wine as a whole must be evaluated just as evaluating painting or music involves judgments about the work as a whole. But although these holistic features in a wine are a product of fruit, acidity, and tannic structure no list of wine components will add up to a wine being balanced, elegant or delicious.”

Impressed By The Skill, Horrified By The Look

Another 18th Century philosopher, Kant was pointed by him for a better answer. “When I judge something to be beautiful, I do so because I like it. But what about it do I like? For Kant, the pleasure I get from a genuinely beautiful object does not lie in the fact I find it agreeable or pretty. Rather, I enjoy how it makes me think. It stimulates contemplation of a particular kind. Kant called this the free play of understanding and imagination.”

I Saw This Today

“Of course, some objects won’t repay that much attention. We explore them for awhile, get bored because we’ve come to identify and articulate everything important about them, and move on. But according to Kant, an object is genuinely beautiful if it sustains our interest in reflecting on it indefinitely because all attempts to fully understand it fail. The object has an order that constantly opens new ways of understanding it because no particular principle is ever adequate. Beautiful objects are intriguing, mysterious, not fully understood, yet at the same time balanced, harmonious, and well put together.”

“Thus, taste, on Kant’s view must refer to our ability to determine whether an object is worth reflecting on, whether it will repay our attention and produce endless fascination. A person of good taste discovers new patterns to explore, finds unexpected avenues of meaning, and responds with feelings and insights that generate new ways of describing something.”

“I Need People To Think I’m A Bond Villain”

Was Next To A Car That Was “Painted” With Duct Tape!

Actually Very Well Made, But Still

Dog Slippers Made To Look Exactly Like Your Dog

His And Hers Wedding Cake

This Car Entirely Colored With Highlighters

Conor McGregor’s Suit Of “F*Ck You”

This Titanic Blow Up Slide

Can You Dig It?