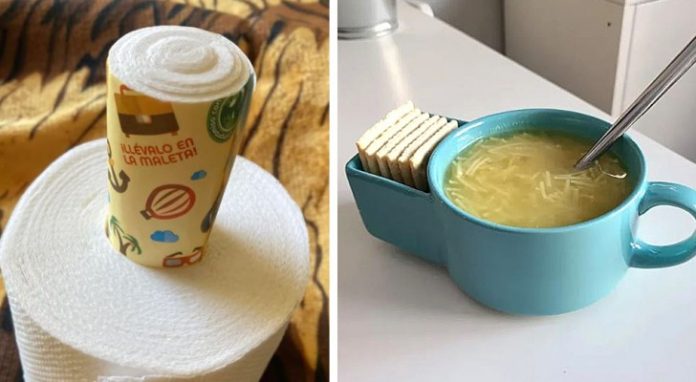 Look around you: how many objects we use every day could be designed differently? Probably a lot, and yet we are convinced that it is like that and that we cannot change them very much.

But that’s where the creativity and imagination of the most ingenious designers come in. When it comes to improving a common object, or inventing a new one from scratch, some people give their best and achieve incredible results. Like the ones we present to you in the 17 photos below: ingenious little gems that should be more widely available. Are you ready to discover them?

1.Who says an adult can’t swing with a child?

This special swing is for both!

It seems much thicker than it actually is: the plastic that surrounds it gives a “magnifying” effect.

3.A small take-out roll inside the large roll

These supports have been installed especially for cyclists waiting at traffic lights.

5.The smart plug that solves many small space problems in the home

6.Everything at your fingertips

Soup and croutons in one bowl: not bad at all!

7.Exactly half a pint

In addition to being practical, this glass is also very aesthetic!

8.Cup too hot? This problem is solved

9.Too many clothes hanging in the locker room? Here is the solution.

A really useful and practical hanger – it should be everywhere!

11.Trolley with defective wheels? Put that panel on it!

12.Do you need help or not? The answer is in the basket

Not a bad idea for shopping, right?

Calculator available without opening the notebook!

14.A simple and convenient way to know immediately if the size is correct.

15.Do you put down the kitchen tongs and dirty the worktop? With this it’s over

16.The clock radio that tells the time from multiple sides

A great idea not to return it when needed!

17.How to turn a simple concrete wall into something useful and beautiful. Have you ever seen benches like this?

Really interesting projects, don’t you think? Which did you prefer?