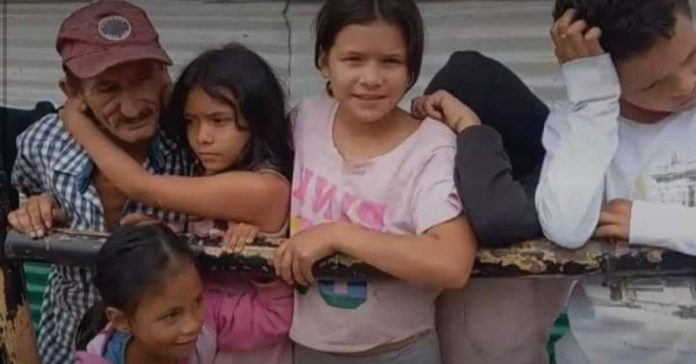 This grandfather went viral after making public the way he cares for and watches over the well-being of his six grandchildren after his daughter left them alone due to lack of financial resources.

Alfredo Suárez, 57 years old, has four girls and two boys under his care, who support themselves solely with the work that Alfredo performs as shoeshine boys in the streets of Fusagasugá.

“ My daughter abandoned them little by little as time went by and she ran out of financial resources, I couldn’t see how they grew up in the streets, without something to eat and that’s why I brought them with me. My daughter lived with the father of the children and the one who first left them was him and it was there when she realized that she could not support them”.

The routine of this large family is quite complicated, since before dawn she prepares breakfast with the little food she has so that the children do not go to school with nothing in their stomachs. But all this is interrupted on mornings when it rains, since everything can be cooked on an improvised stove that is impossible to light if everything is wet.

“ On several occasions they have gone to school without breakfast because when it was my turn to light the wood stove, everything was so wet that it was impossible to do so and that is our only means of cooking what little we have.”

After long hours of work and with back pain, he arrives at his humble home where he is happy, since he receives the best gifts of life, the love and affection of each of his grandchildren.

“ When they ask me for some food and I know that I have nothing to offer them, the only thing I do is cry, I cry with sadness and frustration because I wish I could give them a better life but I don’t know what else to do, I’m older and with many problems of health to get a good job.”

This grandfather became a mom, dad and even a teacher overnight.

It was learned that Don Alfredo and his grandchildren cannot sleep on rainy days because the strong wind blows away the roof of their ranch and all the water wets what little they have. His biggest clients, the local police decided to start a campaign to help this grandfather and his six grandchildren.

“ This campaign is for Don Alfredo and his six grandchildren, we hope that all of Colombia shows solidarity and helps us raise enough funds to help this family, we do this because it comes from our hearts, each of us is a witness to the incredible effort what this man does every day for the care and well-being of his grandchildren.”

Do not forget to share this publication so that more people can show solidarity with this fighting grandfather who made the decision to take care of his six grandchildren before leaving them abandoned as their parents did.