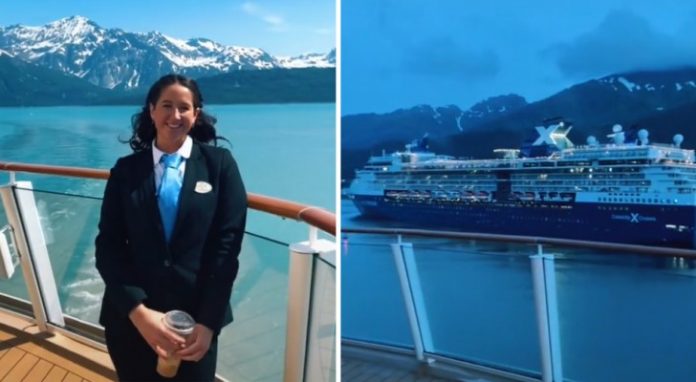 Living by traveling and being able to earn a living by visiting new places is the dream of many, and the possibilities of realizing it are many: some choose to become pilots, others flight crew. There are those who become reporters or explorers, those who simply put a backpack on their shoulders and start traveling without a final destination, contenting themselves with any makeshift job to earn a living from day to day. There are those who choose to combine their passion for travel with that of the sea and embark on cruise ships.

But like any choice, even making a living by traveling has its drawbacks and unfortunately, those who make this choice often don’t take this into account from the start. Let’s discover together the story of this young TikTokeuse who decided to work on cruise ships: despite her disadvantages, will her choice have been successful?

@vix.voyaging is a TikTok user who revealed on her channel that she quit her job to live on a cruise ship for six months . In her videos, the young woman recounts the wonderful places she visited while working full time in a store on an Alaska SZN cruise ship.

“The biggest risk I took paid off,” the enthusiastic girl says in a recap video where, at the end of her experience, she shows the best moments of the trip. “SZN Alaska is nearly complete and here are some of the highlights.”

The young woman, after showing herself in uniform on the deck of the ship, also shows some photos of her adventures on land, such as visiting several new cities and observing local wildlife in natural parks.

After all these good sides, however, the young woman reveals that this choice of life also has a downside : the working hours are very long, something she discovered while preparing to board and which she hastened to joke about in another video. Overall, however, the young TikTokeuse is very happy with her experience, which, while very tiring, is different and exciting every day.

Many users praised her for the big change, encouraging her to keep going, “Amazing! Have fun!” was the most frequent comment. How can we prove them wrong?