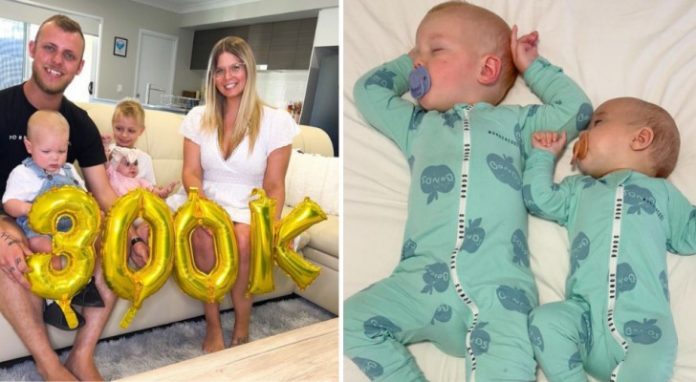 Motherhood is always a gift, a gift that life offers to women and, therefore, also to their partners. An event that in most cases brings wealth and joy, in short, something absolutely positive and part of the beauty of existence. Yet even then, criticism can come from those observing a family from the outside, as happened to an Australian woman who discovered she was pregnant again after being discharged from the hospital where she had just been discharged. give birth .

Allanah Harris has three children and shares her family’s daily adventures on her TikTok account. This woman considers her children a real blessing, but she explains that she constantly feels judged. The reason ? The fact that she got pregnant again shortly after giving birth. Allanah and Brock, her husband, live in Queesland, Australia, and are the parents of little Chase and Ellie. Brock already had another son, four-year-old James, who lives with them.

”Whenever I go out, I am always told that my hands are busy. Yes, my hands may be full but my heart is even more,” Allanah said. When she became pregnant with Chase, the two experienced an indescribable joy of being able to have a baby of their own. giving birth to her first child and returning home, Allanah immediately became pregnant with Ellie: “Right now, three kids is more than enough!” the woman said. I can’t wait to see them grow together.”

The Harris family now has five members, two of whom are almost the same age and whom Allahan calls “little Irish twins” because of their very blond hair and light eyes. Despite their obvious happiness, several internet users have pointed to the fact of having two such small children of the same age.

Thankfully, many people posted positive comments, supporting young Allanah and urging her to disregard the negative reviews: “I am currently 4 months pregnant with a boy and I have a 9 month old daughter, I hope they have the same link as yours,” wrote a follower.

In the end, the important thing is to be happy and then it’s so nice to grow together, do you agree?