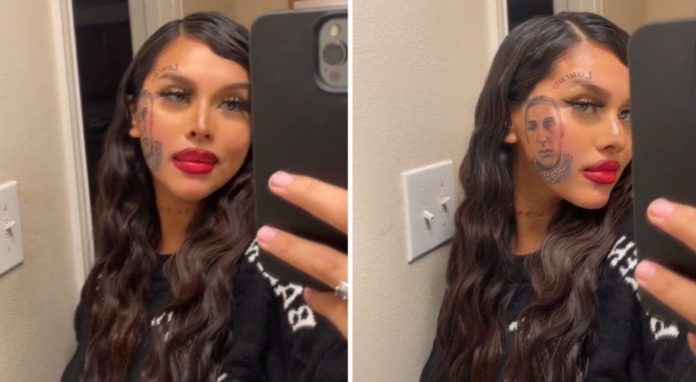 Many young people, when they fall in love, decide to get a tattoo in honor of their loved one, the first name, a date, a detail about their partner that they want to wear forever on their skin. Often, therefore, it happens that the story ends and not always in the best way: at that moment, it is inevitable to regret the choice made and one would like to erase or cover this indelible mark. But what if the opposite happens? A woman has stunned the world of social networks by choosing to tattoo the face of her ex-partner after the breakup, which occurred following infidelity.

Narally Najm made headlines on her TikTok account after showing off her new cheek tattoo and explaining what happened between her and her ex-girlfriend Laura, who she calls “daddy” and with whom she recently had a son, King. Narally discovered his partner’s infidelity, which incidentally took place while she was giving birth: “I thought we were the perfect family. I gave him a child, we bought a house and everything seemed real. .. but then I found out she was cheating on me, even as I was giving birth.”

Despite this, the young mother decided to have her ex’s face tattooed on one cheek, accompanying the portrait of the name “Laura” at the top of her eyebrow and a heart next to it.

For her part, Laura said: “After she gave birth she found out what happened, she caught me cheating on her and I told her it wouldn’t happen again, but she didn’t want to. to be with me”. But later, Narally had to change her mind, as the following text appears on her video : “When everyone is jealous of me because I have Daddy’s face tattooed on my face, even if he wrong. Daddy’s coming back.”

The woman therefore hopes that things will work out and that they can become a united family again. Her line, however, was not appreciated by users, who expressed concern over her choice of tattoo: “I have no words…I’m so sorry Narally,” someone wrote, while another commented, “I assure you we’re not envious, just worried.”

What do you think of this story?