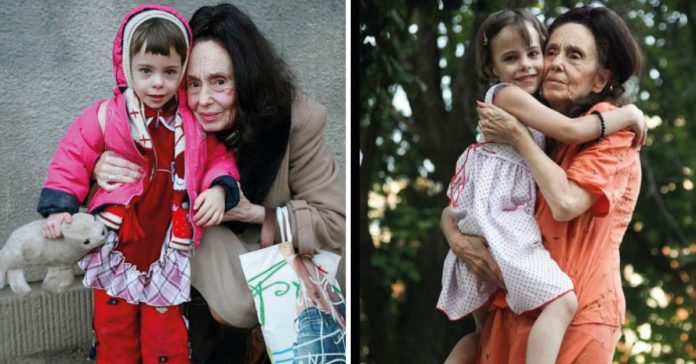 Nowadays we see how many women are closed to the idea of ​​being mothers, the fact of thinking that they are going to bring a child into the world and their life will begin to change completely overwhelms them and for this reason today many young women are determined to not procreate However, we have the other side of the coin, where we find a large number of women who want to live the best experience of their lives and become mothers, but unfortunately their dream is cut short for various reasons.

In this case, we have a woman who had to wait until she was 66 years old to finally fulfill her dream and become the mother of a beautiful and healthy girl.

Adriana Iliescu was born on May 31, 1938, making her currently 84 years old. While the people who manage to reach such an advanced age only try to enjoy their last years of life surrounded by her grandchildren and relatives, Adriana is raising her daughter, who is now a full-fledged teenager.

Iliescu , is a Romanian university professor and author of children’s books. She had a normal life until in January 2005 her story went viral for bringing a girl into the world at 66 years of age whom she named Eliza . The little girl was born in the Romanian maternity and although many did not believe it, she is Iliescu ‘s biological daughter , but not her genetic daughter, since Eliza was born in Iliescu ‘s womb but because she was conceived by a donated egg and sperm.

Thanks to technological advances, this woman was able to fulfill her dream of being a mother, since everything happened through in vitro fertilization and she received the title of the oldest biological mother in the world to have given birth and even won a record Guinness World Cup.

Iliescu’s story was known worldwide, so she decided to share some fragments of her day-to-day life, since everyone was intrigued as to how a woman of such advanced age was going to be able to raise a little girl.

“We lead a normal life, full of happiness, because that is what she brought to my life, total and complete happiness. She is my ideal partner and although we know that the years continue to pass we speak with total frankness and normality regarding how she should do to continue her life without me ”.

The teenager has a part-time job and is supported by a pension and although it is not much money, she feels that in some way she helps with the daily expenses of the home, since her mother only works part time teaching at a university.

“Despite my age, I feel very healthy and full of vitality, I’m fit, I take great care of my diet, I don’t smoke or drink. If I live as long as my parents, Eliza will be 20 when I die. I’m not ready to leave her alone yet, we have more moments to share.”

Iliescu admitted that it is not easy to be a mother, but that she feels happy and fulfilled for having been able to fulfill her biggest dream, which was to be a mother.

“I always wanted to be a mother, I dreamed of it and for years I tried to get pregnant but I did not have a stable partner and then I fully took charge of my career and let the years go by. Having a child is something wonderful, she is now 17 years old and I still do not believe that she is my daughter.

Do not forget to share this publication and leave us your comment for this woman who was not afraid of her advanced age in order to fulfill her dream of being a mother.