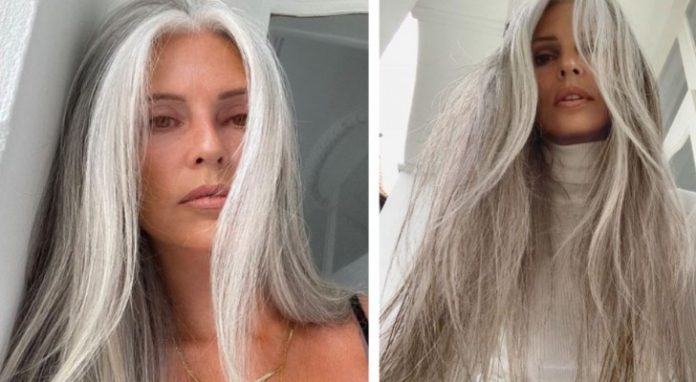 The years pass for everyone, although it would be nice to be able to stay young, to make sure that the signs of aging do not affect our skin. But in general, we try to cover these marks with the help of makeup and coloring.

But even as you age, the beauty is still there. This woman understood it well and decided to stop coloring her hair and show it in its natural color: gray. The question of appearance is still at the center of contemporary society, and with this choice, it has pushed individuals to accept themselves as they are, without a “mask”.

Her name is Annika von Hold , author and influencer, who, at 54, has decided to show herself as she really is, and not to color her hair anymore. This choice has a very specific purpose: to push women to accept themselves . Previously, beauty was associated with youth, but today’s society has started to accept the passage of time and encourage individuals to appreciate the evolution of their appearance and body.

Annika had to deal with her gray hair from an early age. She was 20 when they first appeared and tried hard to hide them. However, after turning 50, she chose not to hide her true appearance anymore and wanted to show herself as she really is.

“I colored my hair for decades. After every vacation without access to coloring, it was the first thing I did when I got home. I had to color it at least every fortnight. And already after a few days, I had a few white hairs on my head”.

She was careful to hide any hair that revealed her true color, until she learned to accept and adopt her true form.

“My hair has never looked better and healthier than it does today. My hair is amazingly silver and goes down to my waist, so people are definitely noticing that. I get lots of compliments on it. All people who see me stop to compliment me”.

Was she right to embrace her true appearance?