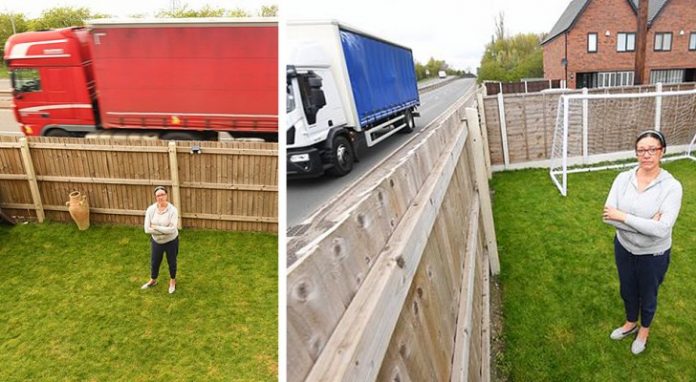 Changing homes is often a real adventure, full of unforeseen events and unknowns. Even though we pay the utmost attention to every detail, there is always something that escapes us. In the case of the Englishwoman we are going to tell you about, what has been omitted, or at least underestimated, is a 4-lane road , 2 in each direction, attached to the house she bought with her husband.

Once settled there, for both of them, began a real nightmare of noise, vibrations and insufficient security . The woman therefore made her situation known, asking the local authorities to install protective barriers for her garden and speed cameras to slow down passing vehicles. That’s when the debate started, even drawing harsh criticism from people who ridiculed her for not noticing such a big issue sooner.

“I’m not stupid,” said Jackie McCormack , who was asked about the case she and her husband are involved in. She said that before buying the ‘offending’ house in Coleshill, Warwickshire – a new build costing around £350,000 – she and her husband had always traveled there at times when the A446 road was relatively quiet .

The noise of passing cars and trucks at high speed was therefore not noticeable. However, once there, the situation turned out to be more critical than it seemed. Sound levels often exceed 85 decibels , while in the garden they can reach over 120, especially when passing trucks. That’s why Jackie and her husband urgently called for the speed limit to be lowered , with speed cameras and protective barriers for their garden, which overlooks the road.

“The noise is absolutely appalling, says Jackie, we have to wear earplugs to bed, the house shakes every time a truck passes, and I’m constantly cleaning up pollution residue from the road.

Complaints which, however, generated an unexpected backlash for the woman. Most of those who have spoken on the issue have in fact argued that the couple should have known what they were getting into by buying a house there . “How could they not know? Wasn’t the noise pollution obvious?” they said.

Jackie’s response was quick . “I knew it was a busy road, I’d be a fool if I thought it wouldn’t have been noisy, but we never imagined it would be this bad. I wonder. I will fight tooth and nail to solve this problem. I cannot move from here, because no one will buy the house.”

A rather thorny and still open question. If, on the one hand, the noise and vibrations of this house could have been foreseen, on the other hand, one wonders how it was possible to build and sell a house in this place , without thinking of the daily inconveniences of its inhabitants.

What do you think ? Is this woman right to ask the authorities to intervene?