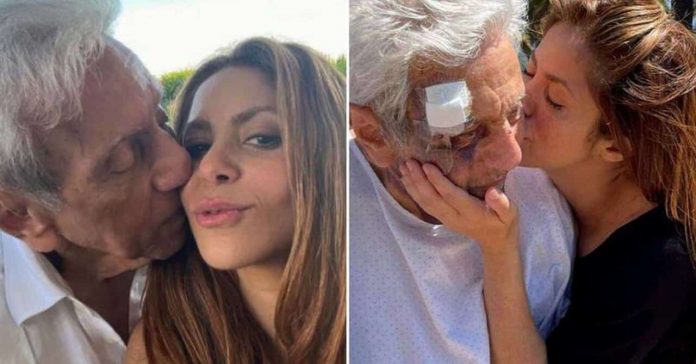 William Mebarak is the great accomplice in Shakira’s life.

The famous has a very close relationship with her father William Mebarak. He has never abandoned her and has always supported her in her projects, firmly believing in her. Her father has been her guide, confidante and inspiration from the beginning.

William Mebarak was born in New York and has Lebanese blood. He later went to live in Barranquilla, where he worked as a teacher and doctor. But not only that, he also became a great poet.

Shakira grew up watching her father spend many hours sitting in front of the typewriter, where he worked on his poems and texts. This inspired the singer and she started writing her own compositions from the age of 9.

The relationship between the two can only be described as unique. The two have always had a great connection. Her parents have accompanied her at every moment of her life, from her awards to visiting her in the studio where she composes her singles.

This is the irrefutable proof that each public sample that the singer shares with us reflects how important it is to her and how much it inspires her.

“Pretty dad, you have boosted my steps, and you have illuminated my path. You have shown me that life is open and deep like a sea and thus, you have given meaning to mine by flooding it with your joy. You are my inspiration, my accomplice and everything, my best friend, ”wrote the famous one to her father on his 90th birthday.

In the same way, he published a video where we can see them both dancing, letting us see the connection they share.

Unfortunately, since last year William Mebarak has suffered various health problems, from Covid-19, falls and various operations. For this reason, at this time, man is delicate. However, his daughter does not lose hope that she will recover.

Despite everything, the man suffers from Alzheimer’s. The famous shared a video where she and her father go out for her birthday 91. In this she sings the song “Ha amores”, a bolero that her father loved.

The saddest thing about the video is that her father can no longer recognize her, because when he asked her who sang the song, the man remains silent, to which she herself has to say “I sing it.”