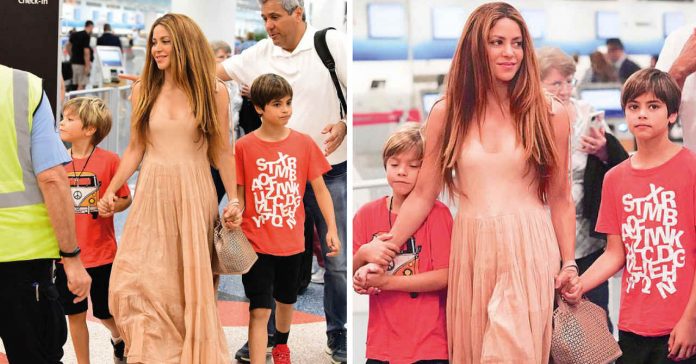 Far from getting angry, the singer had a tender gesture.
We all know Shakira hasn’t been having a great time lately. In addition to her breakup with her partner of 12 years, the Colombian has had to deal with the issue of custody of her children, the health of her father and a debt to the Spanish government. However, the star keeps a big smile wherever she goes.

And with her head held high, Shakira was seen at the Miami airport with her two children, Sasha and Milan. Arriving from Spain, the singer walked through the venue, surrounded by many fans who greeted her and were happy to see her. With that charisma that she has always had, Shakira was kind to all of them, despite all the chaos that she has had to face in her private life.

During his walk he dedicated himself to giving smiles to everyone present. Her mother did not let go of her children by her hand at any time and although she can be seen a little overwhelmed by the crowd, she remained cordial with everyone.

But something that managed to draw much attention was his reaction to a fan’s compliment.

Shakira must be used to the screams of the public and thousands of voices that say her name. However, compliments of this type are probably not as common to hear because they can be hidden among other murmurs. But this time, the Colombian singer was able to hear loud and clear what a fan had to say.

In a video posted on Twitter by the Colombian account , the interpreter of “Te Felicito” can be seen walking through the airport and smiling for the cameras.

“YOU ARE BEAUTIFUL, SHAKIRA,” SAYS A VOICE.

Immediately the singer turns to see where this compliment comes from, smiles, says “thank you” and continues on her way. Although she didn’t stop to interact with the man further, fans found this situation adorable. Her idol had responded to the comment of one of her fans who were waiting for her at the airport. In addition, they considered that other artists could get angry at this type of comment, but Shakira, on the contrary, was kind and even responded to the compliment.