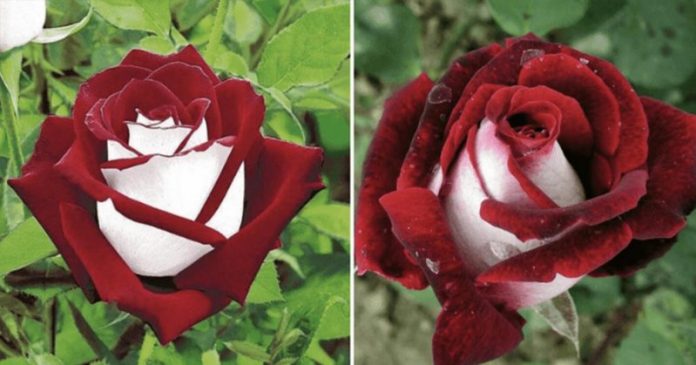 The rose is a favorite flower for all ages. The rose also has a great place in our gardens and also literature. It’s a perfect gift for people we love because of its delicateness, heaven-like smell, different colors, and the softness makes.

These beautiful and fragrant flowers have symbolized romance since ancient times with over 150 species. Now, there are many varieties of roses available as expert horticulturalists have created thousands of hybrids. There’s one rose found more special due its gorgeous two-tone color swirl. The Osiria rose cuts a striking figure that is known for its red petals and bright white center.

This hybrid tea rose has a strong smell and it is perfect for romantic bouquets because of its red and white coloring. In 197, a breeder named Reimer Kordes created it and the plant stems from Germany. A few photographs of an Osiria rose started circulating online several years ago and people start searching for these roses. It’s been noted that those photographs look heavily photo shopped compared to what actually grows by several sources. It left some people disappointed.

The Osiria Rose Is A Red And White Hybrid Flower

The Osiria has a pristine white center and velvet-red petals. The flower is more fire-engine red and the white isn’t always so clean in reality. You cannot find the Osiria at your local garden center, as they’re often not stocked. You can find sellers growing seeds online, but they are often a mixed bag with reviewers complaining that nothing ever sprouted.

Gardeners will have to be vigilant to keep the plant healthy as the plant itself is quite susceptible to insect attacks and diseases like powdery mildew. But you’ll be treated to beautiful blooms that only become stronger as the plant ages if you can weather those storms.

There are also many varieties with dual white and red coloration that are a bit easier to grow, including the Nostalgie rose and Gemini rose.

According to Floral photographer Stan V. Griep of the American Rose Society, “Osiria is not a scam; she does exist but the blooms she produces will typically be different than those shown on the internet which makes the heartbeat a bit faster.”

Griep said that this rose was named after a theoretical empire, Osiria: “I doubt that you will find Osiria on any map or any Biblical or historical mention of her as, again, like Atlantis, she was a theoretical empire. Just as some of the enhanced photos of her, the lore behind the name is enticing.”

These roses have an intense and pleasant fragrance as well beside the incredible appearance.