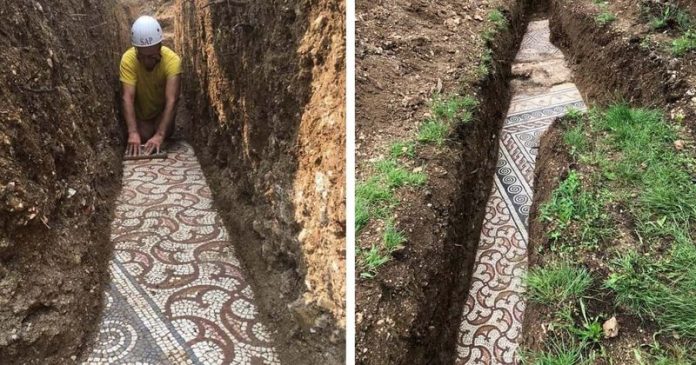 The lead archaeologist said, “I had the sensation of entering a time machine, of coming into contact with reality that’s long gone, so many centuries ago.”

PhotoA stunning feat in the development of Western civilization is Roman architecture. Their buildings and hallways had a really unique and aesthetic approach that isn’t too hard to recognize. Recently archaeologists in northern Italy have discovered an exquisite and surprisingly well preserved Mosaic floor. The findings were definitely from the ancient Roman period. This has been discovered in the township of Negrar, which lies north of Verona. There were also the remains of an ancient villa and a century ago it was brought to public awareness.

Newly discovered just outside of Verona, what could be this year's biggest discovery – an almost entirely intact Roman mosaic villa floor! pic.twitter.com/tZwy0yfvNL

An official statement told that the floor was buried underneath a vineyard in the hilly region. The archaeologists at the site managed to spot the flooring and foundations of the ancient villa several feet below the vineyard after countless decades of failed attempts. Several pictures of the floor was uploaded by the town’s officials and revealed its intricate patterns and colorful detail, a valuable relic of a once-glorious civilization. Most of the decorum has been well preserved over the centuries.

The statement read that the primary objective of investigating archaeologists was to identify the exact extension and location of ancient construction. The town will now be working in earnest to take care of this discovery. The place will be open soon to the public to see said the officials. They did however warn, that: “The result will not come soon and significant resources will be needed.” There are ancient sites in Italy also starting to reveal itself as the peninsular nation of Italy slowly steps out of coronavirus lockdown. The famed House of Lovers in Pompeii was reopened after 40 years following an ambitious restoration project reported the Smithsonian Magazine shortly before the pandemic hit Italy and forced nationwide closures.

DATED BACK TO THE
3RD Century pic.twitter.com/miJ0QbmVDI

The archaeologists were from the Superintendency of Archaeology, Fine Arts, and Landscape of Verona according to a local media outlet L’Arena. Last summer they returned to the site to look for the villa’s foundation, which they just found now. It was unexpectedly halted due to the coronavirus pandemic even though the work continued as recently as February. The floor’s complex pattern and vivid colors really make it a significant find in modern-day archaeology.

The state archaeologist leading the current excavation, Gianni de Zuccato, said of the moment when his crew at the dig first discovered a strip of mosaic, between three and five feet underground “It was one of the most moving experiences of my life. I had the sensation of entering a time machine, of coming into contact with reality that’s long gone, so many centuries ago, and yet having the imprint of humankind. I cannot help but think of the people who laid the mosaics, of the people who lived there — not only the aristocrats but the dozens” of servants and farmhands who lived on the land. “That deeply moves me.”