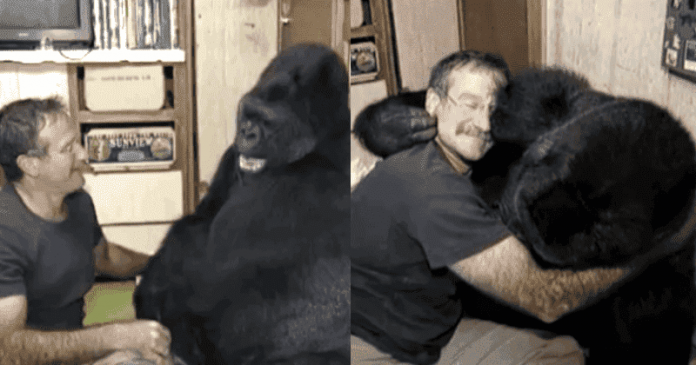 Koko smiled because of Robin. She hadn’t smiled for over six months, ever since Michael, her childhood gorilla companion passed away.

We don’t like to hear any kind of death. There are some deaths that make us sad deep within our soul and we just can’t let go of it. All of us were very sad when we heard about Robin Williams’ death, even though we didn’t know him personally. Williams was so talented and made us laugh with his antics in movies and nobody could escape his charm. He was also a great human being apart from a famous actor. He was kind enough for animals too.

Robin Williams was the first celebrity death that made me cry.

Because a day after it happened, I watched the video where he interacted with Koko the gorilla.

He just seemed…like such a good person just from that interaction. It hit me HARD.

Koko is a gorilla, who is known to express her emotions through sign language. Koko was famous around people as she used American Sign Language to express how she felt. She was also one of the few apes who could express emotions to her handlers. When Robin Williams was invited to meet and interact with her in 2001, they hit it off instantly. Koko was going through a difficult time in her own life as she was grieving the death of her childhood friend, Michael the gorilla, who had died six months earlier when she met Robin.

Koko laughed with Robin. They tickled each other and hugged like they were old friends. Robin is sitting on a chair while waiting for Koko to come in the video. Koko entered the room and sits next to him on the floor and grabs his hand. The actor got up and took a seat next to Koko. They were laughing and observing each other.

If you’re looking for a “sign” that things are getting better, check out my content! KoKo the gorilla learned over 1000 signs in “Gorilla Sign Language”. If a gorilla can learn to communicate maybe we can too.#voicemonkey #mondaymotivation #voiceover #business #marketing pic.twitter.com/ihjKcZ6hns

Francine Patterson, Koko’s caregiver, said “Notice that Robin made Koko smile — something she hadn’t done for over six months, ever since her childhood gorilla companion, Michael, passed away at the age of 27. Robin’s ability to just ‘hang out’ with Koko, a gorilla, and in minutes become one of her closest friends, was extraordinary and unforgettable. But not only did Robin cheer up Koko, but the effect was also mutual, and Robin seemed transformed.”

Researching this episode on Koko the Gorilla and now I just want to talk about the history of American Sign Language for like 3 hours?

Robin made Koko feel comfortable and she became closer to him and even grabbed Williams’ glasses and tried them on. Koko went through his pockets and searched his wallet at one point during their interaction. The interaction between them is heartwarming to watch and the actor felt the same way. He said, “We shared something extraordinary – laughter. Koko understands spoken English and uses over 1,000 to share her feelings and thoughts about daily events, life, love, even death.”

With things like these, one can only think, who really is the superior race? ? https://t.co/5S9dZOOt9A

Koko reportedly signed “cry” when Koko was informed of Robin Williams’ tragic death. Koko the gorilla was born in San Fransico Zoo. She lived most of her life in the Santa Cruz Mountains, under the care of The Gorilla Foundation in Woodside, California. Koko was raised and cared for by humans since her birth. Koko understood 2,000 words of spoken English. She might be an ape but Koko’s intelligence was the same as a 3-year-old child Patterson reported.