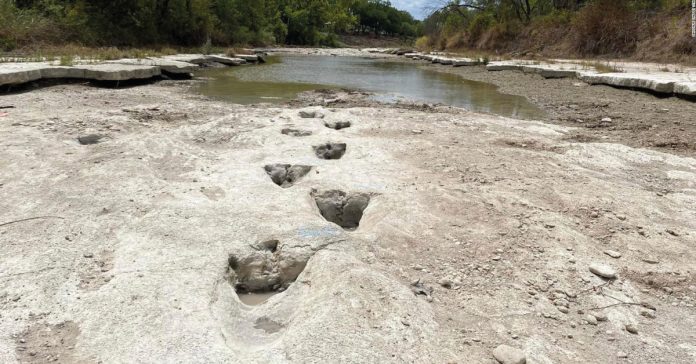 These footprints are believed to have been left by a species of theropod.

This week we have been surprised with a new finding in the field of paleontology. A whole collection of dinosaur footprints turned up at Dinosaur Valley State Park in Texas . In fact, this place is known as the Capital of Dinosaurs , due to the many fossils that have been found. More than 100 million years ago, these animals inhabited the area.

This new discovery was made possible by a drought in the Glen Rose region of Texas. According to NOAA’s National Integrated Drought Information System , Somervell County is experiencing an exceptional drought. This caused the flow of the Paluxy River to decrease considerably, exposing the footprints.

The Dinosaur Valley State Park shared a video through its Facebook account where you can see the fossils. These are footprints belonging to some theropod . In the clip you can also see how a group of experts and volunteers work to remove the mud and clean as many footprints as possible to make a map of the path that that dinosaur followed millions of years ago.

According to Texas Parks and Wildlife , two types of tracks can be found at the site: sauropod and theropod tracks . The first are huge dinosaurs characterized by a long neck, a small head, a wide tail and thick legs, similar to those of today’s elephants. Tracks of this type are believed to have been made by a Sauroposeidon proteles.

For their part, theropods are characterized by having limbs with three fingers. They are smaller beings and the footprints of this species in the Dinosaur Valley are attributed to Acrocanthosaurus . It is worth mentioning that these footprints do not always follow the pattern of the three fingers since they are marked on deep mud, so sometimes they are “long” and the fingers “hidden”.

There are currently 5 sites along the Paluxy river basin where you can find plenty of theropod and sauropod footprints. Most of them form trails and at some points you can see footprints in different directions.

The first traces were discovered thanks to a flood in 1908 . The flow of the Paluxy River swelled to epic proportions and swept through the riverbed, sweeping away bridges and culverts. A year later, a nine-year-old boy named George Adams discovered something unusual in the river: footprints of a three-toed animal. After two decades, a fossil collector at the American Museum of Natural History in New York named RT Bird saw the theropod footprints in a store and decided to travel to Texas to see them for himself.

There he also found footprints of sauropods, which in fact are the first evidence of the existence of this animal. In 1972 , the Dinosaur Valley State Park was inaugurated, an area of ​​​​almost 6.5 million square meters destined to preserve the sites with footprints.