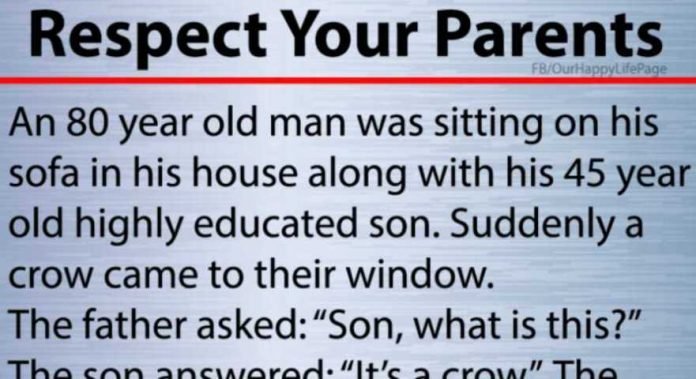 An old man who is 80 years old sitting on the sofa in his house with his highly educated son who is 45years old. Then, a crow perched on their window suddenly.

His son said “It’s a crow, a crow” in a rebuff tone. After a little time, the Father again asked for the 4th time, “What is this?”

“Why do you keep asking me the same question again and again, although I have told you so many times ‘IT IS A CROW’? Are you not able to understand this?” this was the answer of the son in an angry manner.

The Father went to his room and brought an old tattered diary, which he had start writing since his Son was born. The Father asked his Son to read on opening a page. So, he started reading it.

“Today my little son aged three was sitting with me on the sofa, when a crow was sitting on the window. My Son asked me 23 times what it was, and I replied to him all 23 times that it was a Crow. I hugged him lovingly each time he asked me the same question again and again for 23 times. I did not at all feel irritated I rather felt affection for my innocent child”.

The child asked 23 times “What is this,” and the Father answered it for 23 times without any irritation. But, today when the Father asked the same question from his Son for 4 times, the Son felt irritated and annoyed.

Speak to your old parents in a gracious word, be cool, obedient, humble and kind and be considerate to them without repulsing them or looking at them as a burden. Start to say this aloud from today by saying a prayer to God “I want to see my parents happy forever. They have cared for me ever since I was a little child. They have always showered their selfless love on me.

They crossed all mountains and valleys without seeing the storm and heat to make me a person presentable in the society today. I will serve my old parents in the BEST way. I will say all good and kind words to my dear parents, no matter how they behave.”

Thank you for spending your precious time on reading this.

Here’s a recreated video of this story you must see: