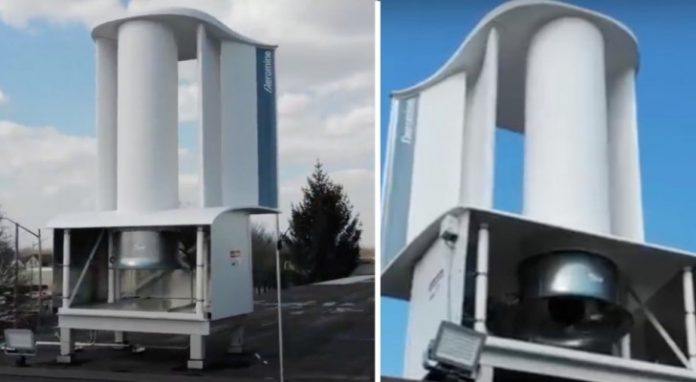 Scientific development is mainly directed towards the creation of machines that promote the production of clean energy and protect and preserve the environment. These objectives can be achieved through the study and constant use of renewable energies. Until now, the focus has been on photovoltaics, ie the generation of electricity from the sun’s rays. However, solar panels require a lot of space and not everyone can afford to install them. That’s why some companies focus on creating tools to harness wind power.

This company has created a mini wind power plant that is not only space-saving, but also quiet and vibration-free.

This innovative system was produced by the Texas company Aeromine Technologies. The product is nothing more than a miniature bladeless domestic wind turbine, which apparently seems to stand still.

This small power station is intended to be placed above the roofs of houses or buildings. It is a cylinder, which has wings on the sides. Its functionality is fully integrated into the design, precisely because it is the wings that allow the airflow to be amplified. The wind, in this way, is literally captured and amplified, in order to allow the turbine hidden inside the cylinder to turn and generate electricity.

The company wanted to highlight the enormous potential of its product in a press release, explaining that the machine is “designed to work perfectly with the existing electrical system of the house. The combination of Aeromine and photovoltaic panels on the roofs can generate up to 100% of the energy demand”.

A real breakthrough in energy production. One of the criticisms often made against wind turbines is that they are imposing, which can detract from the beauty of the landscape, and, above all, that they are noisy.

Thanks to the Aeromine power plant, these problems are eliminated because, in addition to being free of vibrations (because it is almost motionless), it reduces noise and its impact on the landscape to a minimum, since it is designed to be placed on flat-roofed buildings such as warehouses.

What do you think of this invention?