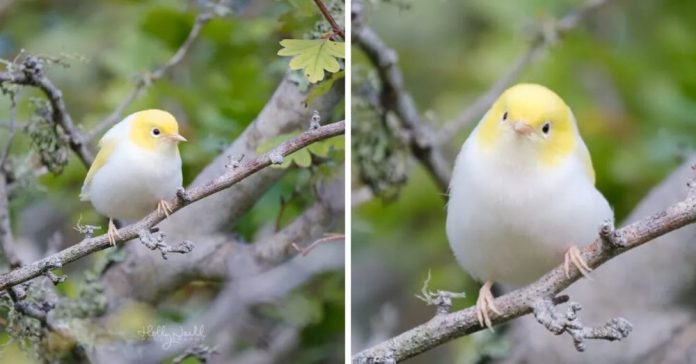 A Wellington photographer has seen an extremely rare bird when she was out for her daily lockdown walk.

Photographer Holly Neill, in Kelburn, very near the CBD has captured a white tauhou (waxeye) – a leucistic bird with just pure white and bright yellow feathers.

Neill said that the birds are exploring further than they used to due to less traffic and noise due to the nationwide coronavirus lockdown.

“It is amazing to see a leucistic tauhou that seemed to be an adult bird because often leucistic birds are preyed upon more easily since they stand out so much.”

Holly Neill explained on her website “Kia ora! Today I had one of the most exciting native bird encounters I’ve ever had, and thankfully I had my camera on me! With the whole country in lockdown because of COVID-19, I’ve been going for short early morning walks around the block each day and have treated them as my ‘commute’ to work, which is now in my lounge. Last week, I spotted what I thought was a leucistic tauhou (waxeye) from a distance, but I didn’t have my camera on me so I couldn’t be 100% sure. I did wonder for a moment if it was a rogue canary, trying to assimilate with wild native birds which would have been a bold move. Since that first sighting, I’ve been carrying my camera on each walk just in case I spot that gloriously rare bird again. Today, I got super lucky!”

Neill paid close attention to the birds she sees along the way when she was going on daily walks on the exact same route each day.

“I’ve been spending a lot more time in the garden than usual too, like most people, and had an awesome day last week where I saw tūī, kākā, kereru, pīwakawaka, riroriro, tauhou and a ruru in one day.”

According to Zealandia, the native birds in their sanctuary are becoming more curious during the lockdown.

“What a beautiful bird … I have never been lucky enough to see one and certainly have never heard reports of them at Zealandia.”

According to Neill, the entire backyard trapping around Wellington must be making an impact to help such a brightly colored bird make it to adulthood.

She was only 500 meters from her house when she took the photos of this bird.

“Self-isolating and social distancing during a lockdown doesn’t mean we have to miss out on the wonders that our gardens and backyards have to show us.”

Leucism, or leukism which is an abnormal plumage condition caused by a genetic mutation prevents pigment on a bird’s feathers.

A photographer in Whangarei spotted a rare white piwakawaka (fantail) with leucism in 2017.

A usual waxeye, or silvereye, is in dark grey and green color with a distinct white ring around its eye.

In the 1800s, the small and friendly, not threatened bird species self-introduced itself to New Zealand forests, and now they are widely spread throughout the country.