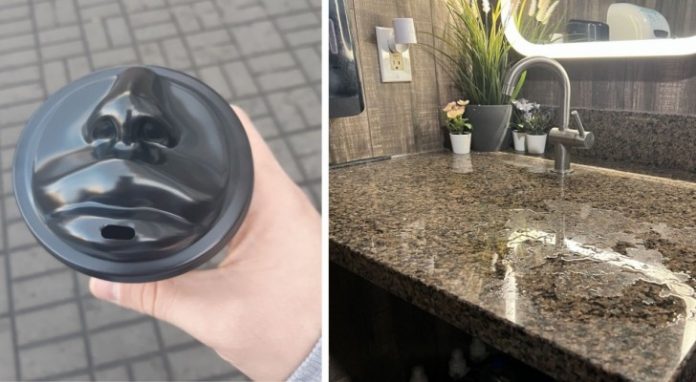 Every time architects and engineers have to present a project, they do multiple tests. They first draw an outline of the idea on paper, then as they think about it, they add details until they reach what could be the final form. Once this point is reached, the actual production begins. Once the product is created, it is tested to see if it is comfortable or if changes need to be made.

When designing the cap for this cafe, they thought about how to make it look good, but not so much how it might be functional. By placing the mouth over the hole and lifting the glass, the nose fits snugly into one of the drinker’s two eyes.

When they built the plumbing and placed the pipes, they didn’t give it much thought, because if they had, they wouldn’t have put it in front of a switch.

Maybe it wasn’t the best idea to make a flat sink, as soon as you turn on the water it starts splashing all over the place. The problem will then arise for those who will have to clean it.

The decor of this establishment is undoubtedly very beautiful, but it creates a real optical illusion. It is difficult to understand where we are. There seem to be wires everywhere.

The wording has very distinctive and eccentric characters, too bad it’s wrong… It should say “Summer” and not “Summor”.

When they made the design, they didn’t think about where the eyes would go. When you open the windows, your eyes are too far away.

Making transparent panels was perhaps not the best idea of ​​this engineer or urban architect. Anyone traveling on this road should stop and approach to read the signs.

When they made this sink, they didn’t think much about the measurements. If we turn on the water, we can’t wash our hands, there’s no room.

The only purpose was perhaps to make the viewer burst into laughter. Socks with crow’s feet drawn on them have no real function.

When they built this slide, they didn’t think anyone using it would hit the beam right in the middle.

It would have been nice if the person who made it hadn’t made a small spelling mistake. This wooden sign is supposed to indicate the current season. Too bad “Autumn” has to be “Fall” and not “Foll”.

A shower in the middle of the hotel room is undoubtedly a design creation, but above all a flashy one. The question is how functional it can be.

Is a chair decorated with pebbles comfortable? If someone sat on it after a few minutes, they would have to get up.

A door with clear glass might not have been the best choice. Everyone can see what is going on inside the bathroom, maybe we should plan a moment of privacy in these cases.

Marvel superhero fans will find this creation ingenious, but are we sure it’s practical to use?

Do you know of an invention where more attention was paid to design than to comfort and functionality?