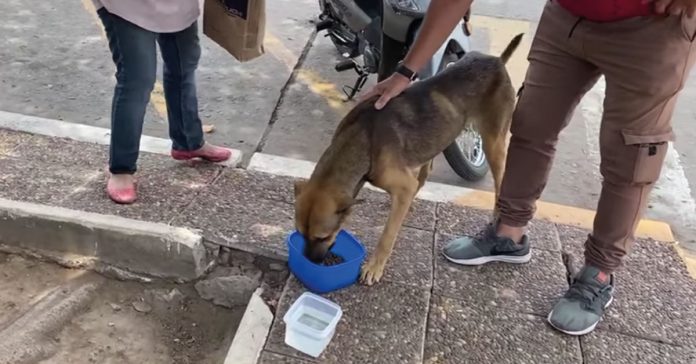 The stray dog ​​received help from the neighbors, who immediately called the vet.

On December 1, an unusual event took the inhabitants of the province of Salta in Argentina by surprise . Some people were taking care of their business in the Plaza Genera San Martin de Tartagal when they noticed that a furry was in trouble. The animal was having an epileptic seizure and some individuals did not hesitate to help it and quickly called the emergency number.

Dr. Gillermo Alesso , Director of Bromatology of the municipality, went to attend to the mishap. Once the puppy’s crisis had passed, they gave the animal food and water, which he ate desperately. Judging by the furry’s body, he hadn’t fed for a long time.

The Videotar Noticias medium recorded the event and shared details on Facebook . In the images you can see how the little animal, still trembling, swallows the croquettes and a man remains by his side taking care of him.

“They called us because they were worried because he had an epileptic attack,” Alesso told the newspaper’s correspondent. Then he added: « We are going to take him to the anti-rabies center and if he needs to be medicated we will medicate him, if the owner shows up we will deliver him. You have to treat it with a medication that is specific to the pathology .

The doctor mentioned that they were going to follow up on the puppy’s condition and if the owner did not arrive, they would find him a home. The condition of this animal makes it need special care and take medication all the time, so it requires responsible and attentive owners.

Alesso also explained that the puppy was probably lost after a previous seizure. « They are lost neurologically until they recover their state and then it is as if they were anesthetized, due to the neurological lesion »He commented.

Then he pointed out that the episode that occurred in the Tartagal square affected the little animal quite a bit. “The myoclonus that he suffers, the involuntary movement of the paw, is a sequel to the neurological attack,” he said.

Among other considerations, he asked people with pets to be very aware of the temperatures in summer because animals also suffer heat strokes just like us. He recommended protecting them from prolonged exposure to the sun and always having clean, fresh water available. He even said that dogs could be bathed up to once a week and cats, if they were allowed, too.

The people of the municipality were very grateful to Dr. Alesso and they let him know in the comments of the publication. The man is well known in the region and also very loved by the inhabitants.