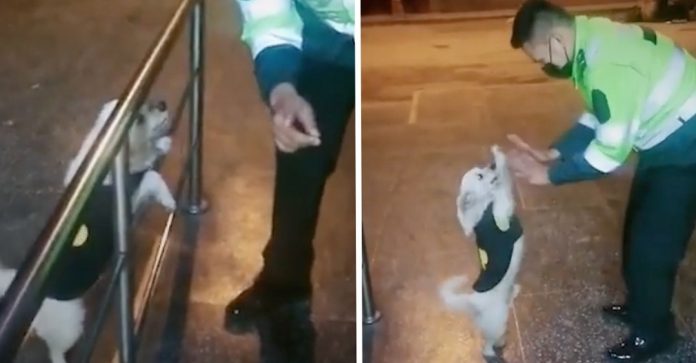 Animals are increasingly impressing humans because of the unimaginable powers they have. In this case, a little dog has earned admiration on the internet because he is a dancer who could launch himself into stardom. The video they posted on the TikTok social network shows a nice policeman watching the station where he worked. From one moment to the next, the same policeman begins to dance a tender and lively choreography with the puppy that was next to him .

The dog, who is wearing a vest as clothing, begins to jump, resting its paws on the policeman’s hands, while a song is heard in the background . At the end of the video, the policeman approaches the little dog to congratulate him on his excellent performance with the dance steps. Thanks to the description of the video that Kevin Rodríguez posted, you can find out the name of this dancing dog, his name is Copito, and he apparently belongs to the subject who appears with him in the video .

In just two days of uploading the video to social media, the hilarious video racked up more than 20,000 “likes” and TikTok users showed their happiness with hundreds of positive comments for this adorable little dog and its owner. « In the police stations they always adopt stray dogs and make them part of the family. Congratulations ». ” I love you little dog that bumps the paws “. ” That Cup is a sweetheart ” are some of the lovely messages left by users of the social network in Kevin’s post. Copito and the policeman definitely have an innate talent in dancing .

Below you can see the video of this adorable little dog and its owner dancing:

Share this beautiful video with your friends and family. So that they can see that animals not only learn to give their paws and sit down, they are more intelligent than we think.