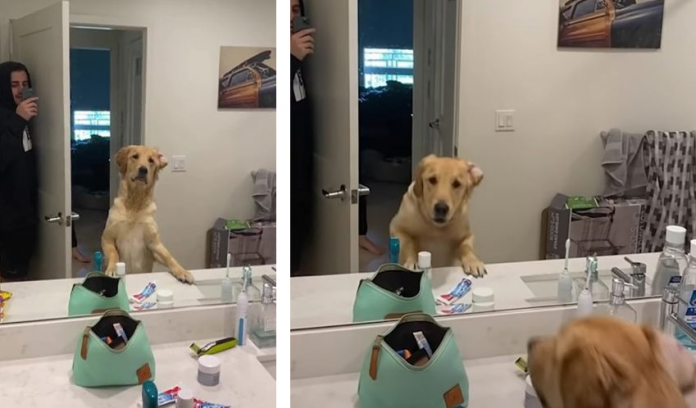 Golden Retrievers are typical large dogs but with a little boy spirit. No matter how adult the dog is, we can assure you that even in its last years it will be as playful and silly as the first day. This time we show you a funny video that has made us cry with laughter, an adorable Golden Retriever is stealing attention on social networks .

This is the video in which the naive Moose is tricked by his own human dad. This Golden puppy loves to play with his owners and they usually hide around the house and bother him to encourage him to chase them . On a game afternoon, Shane and Lindsay, the couple responsible for the dog, couldn’t contain their desire to trick Moose. Moose is 10 months old and lives in California, United States.

In the short recording, the dog is seen playing hide and seek with its owner. Shane hides in the bathroom, and the mischievous Golden comes looking for him . The puppy hangs around the shower area, looking for his dad but doesn’t seem to notice him. While Lindsay waits in the hallway, she realizes that Shane hid behind the bathroom door. The woman discovers it thanks to the mirror on the dresser, but the innocent puppy seems not to realize the obvious. It is then that the young man decides to call him to guide him with his voice.

« Where is he? Shane asks wryly on the recording. The puppy recognizes his voice and goes back into the bathroom, but is surprised to find himself face to face with his double and his father pointing her mobile phone at him . There really wasn’t a pup, and Shane hadn’t been trapped in the wall either, as Moose might have thought, but that’s something not all animals can recognize. The puzzled face of the dog is touching and that is why many people have shared and laughed at the video .

For dogs, the recognition ability is based more on their sense of smell than on their vision. And that is why these animals are not capable of recognizing themselves when they are in front of a mirror. Dogs react when they see their reflected image but are not aware that it is themselves. After Moose snaps out of the shock of him, the pup quickly turns to his dad to catch him . It seems that only at that moment does he realize the deception of which he had been the victim due to his own innocence and he goes from stupor to action.

But this puppy is very cute, and he only approaches his owner as if wanting to continue with the action . For our pets we will always be the best. Although we take advantage of their innocence to spend with them unique moments that we will keep in our memories and in our hearts. But Moose has nothing to worry about because he’s not the only puppy who gets a surprise in front of the mirror. Shane has laughed a lot with the recording, although the joke arose without planning . What is certain and is planned is that both he and his partner are happy to have the puppy at home. And they are determined to give him all the love of him.

Below you can see the funny video of Moose looking for his dad in the bathroom:

Share with your friends and family this fun video of the Golden Retriever playing hide and seek.