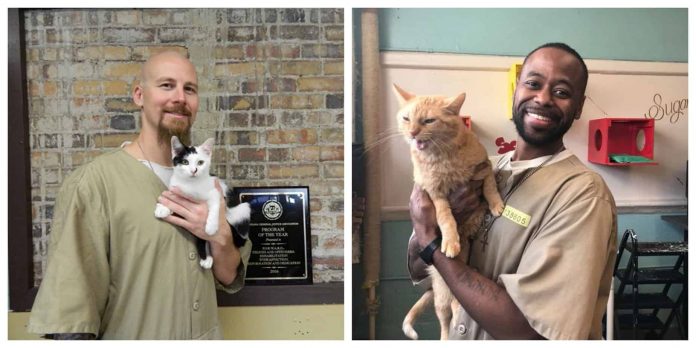 Animals have the power to heal us. For many years, we respect and welcome the therapeutic power of dogs.

Cats and dogs help us with depression, anxiety. They also serve us as some of the best companions, elevating our moods and also decreasing blood pressure.

They have the ability to transform lives by helping convicted offenders.

An amazing project called F.O.R.W.A.R.D was started by the state of Indiana coupled up with the Animal Protection League at the Pendleton Correctional Facility in 2015.

It’s a brilliant idea. Shelter cats are kept in the correctional facility and inmates take care of them.

The project was an amazing initiative for inmates and also for the cats.

Many of these cats come from terrible backgrounds. The cats also get the proper treatment and care they need by socializing them with humans in a controlled environment.

These felines end up sitting at shelters for ages being less desirable as adoptees as they aren’t very trusting. This program offers patience and love until they find their forever homes.

The prisoners allow the cats to start trusting again by feeding, grooming and cleaning after them.

The inmates are given the opportunity to learn compassion, caring for something that needs love and responsibility with this program.

The director of APL, Maleah Stringer said, “I’ve had offenders tell me when they got an animal, it was the first time they can remember they were allowing themselves to care about something, to love something.”

The APL writes on their website, “It teaches them responsibility, how to interact in a group using non-violent methods to solve problems and gives them the unconditional love of a pet – something many of these inmates have never known.”

This project is spreading all over the US prisons, with Monroe Correctional Complex-Special Offender Unit being no exception, teaming up with the organization called Purrfect Pals.

Purrfect Pals writes on their website, “The MCKC Program has reduced offender idleness, taught offenders about responsibility and increased their self-esteem. Since the program’s inception, offenders have been motivated to enroll in school, obtain jobs, obey unit rules and improve their hygiene so that they may become MCKC participants. The presence of animals on E Unit has added a new calmness to E Unit’s therapeutic milieu and strengthened its community spirit.”

People were angry with the release of Death Row which aired in 2018.  It shows the viewers the story of Indiana State Prison’s inmates who were allowed to keep cats in cells.

People also said that giving the chance to take care of cats to those who convicted of such heinous crimes as they cannot be trusted.