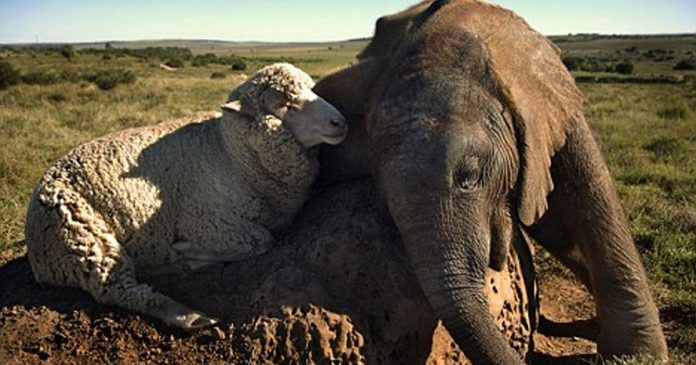 Family is also by choice

The unlikely link between the elephant Themba and Albert the sheep has taken the wardens of the nature reserve by surprise. And it is that this union is not fortuitous, the six-month-old elephant was orphaned after his mother died in a fall off a cliff.

After a week had passed, the little elephant was still alone. The hope that an elephant calf will survive alone is very low, since this animal is highly social. He was taken to the Shamwari Wildlife Rehabilitation Center . That was where the little elephant met Albert the sheep.

At first the little boy approached the sheep and ended up getting scared, so he hid in a nearby cave. When the flock of sheep that was there went to graze elsewhere, Themba waited outside the cave, he was out for about 12 hours. The little sheep insisted, until Albert came out of the cave and that’s when the little elephant and the sheep became great inseparable friends.

Veterinarians at South Africa’s Sanbona Wildlife Reserve monitored the young elephant for a week, hoping it would be adopted and suckled by another elephant, but that didn’t happen and staff at an animal hospital were forced to take it in for not starve to death. That’s when they decided to transfer him to the Shamwari Wildlife Rehabilitation Center in the Eastern Cape, and there they introduced him to Albert.

‘Albert is like a brother to Themba and is definitely an important member of Themba’s pack. – comments – At first, we were a little worried that we might end up with an elephant that thought it was a sheep, however, it turned out the other way around.

Albert copies everything Themba does. In fact, they have almost exactly the same diet. Albert is the first sheep I’ve ever seen eat a prickly acacia.

“He has been studying Themba and has found the best way to get his mouth around the long, sharp thorns to reach the juicy leaves.”

Did you ever expect to see the friendship between a sheep and an elephant? Let us know in the comments! Share this note with your friends to spread the love these two animals have for each other.