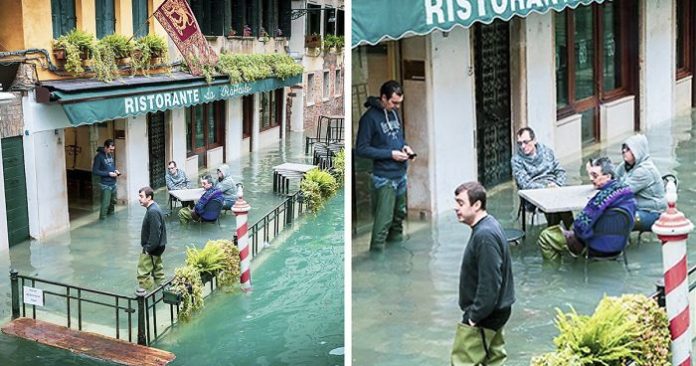 It’s really hard to get around if you visit Venice. There are many canals and endless narrow streets which turn out to be dead ends and it almost looks like a maze. If there’s water on this hard mode, it may sound really crazy. But, it’s the current situation in Venice.

Italian photographer Natalia Elena Massi recently visited the flooded city.  His photos will make you realize the situation going through there and how hard is it for the residents. The photographer said she heard about the flooding on the news and had to see it for herself

Natalia said, “I love Venice, and I visit it whenever I can. This time, I decided to go and photograph the city with the hope of finding it beautiful anyway.”

Natalia wanted to see the city with her own eyes even if she lives about 100 km (62 mi) away from the city.

Natalia said “I hadn’t thought about how difficult it could be. Imagine walking for hours with water well above your knees.”

The photographer was only wearing rain boots that only reached her knee and they wouldn’t be enough. She bought some high galoshes to protect herself from all the water but in just half an hour they got shattered. Natalia ditched them completely as she was already wet anyway.

Natalia said “I worked in manual mode, I didn’t want to leave anything to chance.”

Natalia said, “I have met incredible people, proud and courageous men who were not defeated by the flood. Even though most shops were closed, the few that were open were happily letting in people just to protect them from the weather. Some of them were preparing to re-open, others were … pumping out water and keeping the growing tide under control. Many men remained at the entrance to constantly check the tide level. They were expecting 160 centimeters (5 feet 2 inches) and everyone was alerted.”

According to what the photographer said, the atmosphere was surreal and there was a silence she had never before seen in Venice. “The most interesting part of the journey was being able to see the majesty of the city and how its beauty was amplified by all that water.”

Natalia also added, “When I arrived at Piazza San Marco, it was closed to the public, and the water was really very high. The wind blew strongly and loudly but the view in front of me was incredible – this huge empty space, filled with water was so solemn and great that it didn’t seem real.” She also said she found Venice more beautiful than ever even in tragedy. Photographer concluded saying, “The water that threatened it made it even more fascinating.”