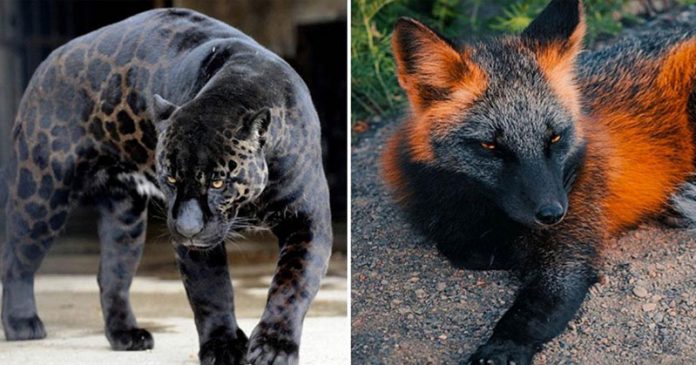 You may have seen an albino animal, and you know how unique they can be. There is also the opposite condition. Melanistic animals appear black instead of their intended color and they are as incredible as they sound.

A rare genetic mutation that causes the animal to lose all of the pigmentations in its skin is Albinism in animals. The animals’ fur will also be white in color.

Melanism can be occurred in the same way, with the mutation of genes but not the same ones. The animal appears black because the mutation of these specific genes causes the more dark pigmentation. This can be seen in many animals such as panthers are actually melanistic jaguars.

Pseudo-melanism is another type of pigmentation that can cause animals to appear darker than they should be which is also known as abundism. The spots or stripes of the animal, on animals such as jaguars and zebras, are much larger than normal. They are not necessarily fully black but this gives them the appearance of being much darker.

This can be going down through generations (adaptive melanism) in both cases. This can also be a part of evolution. When considered, the black panthers’ dark hue makes it much easier to stalk prey at nighttime or in the dark cover of the jungle.

Other types of Pigmentation

There are other pigmentation variations to exist in the wild rather than Albinism and Melanism:

These gorgeous creatures remind us of how amazing nature can be. You are very lucky if you ever get to see a melanistic animal in the wild.