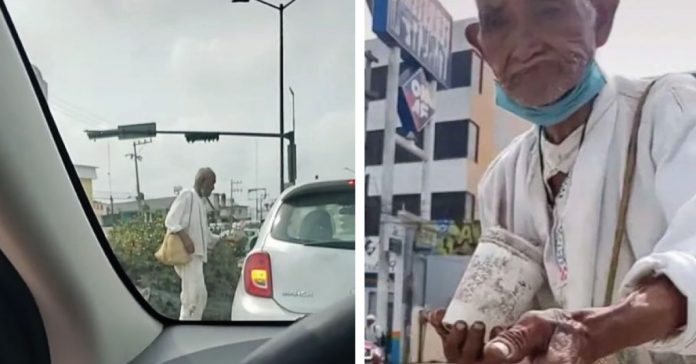 The economic crisis is not only focused on certain countries or areas of the world, on the contrary, it is increasingly common to find people in terrible situations due to lack of shelter, food, clothing, and above all stability that is difficult to find.

Children, women, and the elderly are part of the vulnerable population that lives on the streets due to completely different circumstances; however, it is a fact that without opportunities and support, they will continue to wander on their own.

In recent days, a story went viral but for the wrong reasons, as Aldair Jesús Villela was surprised to witness the rejection of an elderly man rejecting the money that people gave him at traffic lights.

It turns out that this old man keeps asking for money, however, and although it is not a crime, his attitude is not the best, since he does not receive any help, on the contrary, he almost demands that they give him more money and not as usual what the other person wants or has.

Through a TikTok shared on said network, the awkward moment was recorded and seen by millions. In the clip you can see how the man approaches Aldair’s car, who was about to only give him two pesos but when he hands them over, the old man simply throws them back at him.

The driver innocently just asks him the reason why he is throwing it at him but receives no answer. The users who came to see the video began to comment that it is not the first time he has done it, moreover, they assured that the man only accepts more than 10 pesos.

The video already has more than 5 million views on TikTok and more than 659,000 “Likes”, but among the shared anecdotes, some even recounted the kind of fraud that this man is doing.