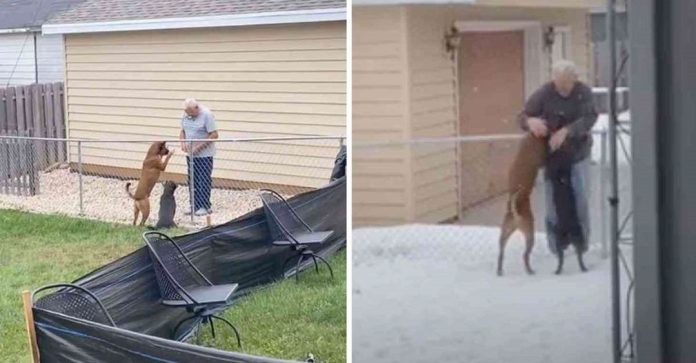 Neighbors are something that just about everyone has, and sometimes it’s beneficial and sometimes it’s not. The relationship will depend on how these people get along and if they have common interests to share, as well as the attitude they show when solving problems. Although it is also given that animals can become neighbors, and even the best friends. As is often the case with puppies, and to win one’s friendship it is essential to give love, affection and attention.

A man named Joe understood all this perfectly. Whose dog neighbors love him very much and visit him through the fence that separates their houses . The owner of the two dogs, Amanda Lin, shared the video on TikTok that collects all the moments in which her pets have fun with the man who lives next door to her. ” We love our neighbor Joe ,” the woman wrote in the social media post. The first shows the three friends sharing under the snow. The two dogs are standing on their hind legs, leaning against the fence while receiving affection from neighbor Joe . Who strokes their heads and they wag their tails frantically, thus reflecting their joy at seeing the man.

In the next shot, the man is seen throwing food at the two puppies and they jump to successfully receive it . All this occurs in the patio limited by the fence that separates the two houses. It is unknown what exactly Joe will have done to win his heart, as well as love and attention. But the two puppies love him so much that they follow him through the same fence while he is working in his garden . They even play right there, he throws objects for them to look for, nothing prevents them from having fun . Their tails show the happiness they feel when they see the man, they move it at all times and that is something beautiful to see.

A beautiful friendship that has gone through all the seasons of the year and has grown over time . ” For me, a person who loves dogs is a person I can trust ,” one user commented on the woman’s post. ” I hope all the neighbors are like this ,” said another user on the social network.

Below you can see the adorable video where these two puppies are seen playing with their great friend and neighbor Joe:

Share this video with your friends and family, so they can see that neighbors are not always bad, and that there are some with good hearts who even love the neighbor’s pets.