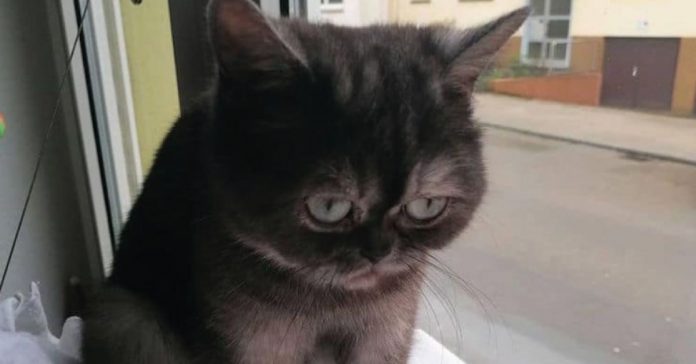 After a year, this little girl was finally able to be adopted. Bean spent long months waiting, because no one wanted her because of her melancholy look.

In the world, there is an animal for each person. Depending on your personality, habits and tastes, there is an ideal pet that will fit into your life. Some people prefer dogs, others cats, some prefer birds, rodents and even reptiles. The important thing is that once you find your ideal partner, you give them the love and care they deserve.

In this case we want to talk to you about little Bean. She is about a kitten that was found in the trailer area, where she was alone, she was hungry, cold and even had an eye infection. She was soon transferred to a shelter where she was cared for and it took more than a year for someone to ask for her to adopt her. Apparently, no one wanted to take her home for having an “angry face” although this was the furthest thing from reality, because she is actually very tender and affectionate.

Her photo had been posted on the shelter website for over a month and not a single person had asked about her. It wasn’t until one night that a girl named Francisca Franken fell head over heels in love with Bean’s strange expression. It was at that moment that she decided that she was the cat companion she was looking for.

Several weeks passed before Francisca received a call asking something unusual: “I received a call from a kind woman at the shelter who asked me if Bean was really the cat I wanted to adopt because, apparently, no one had taken an interest in her before,” she says. Franken. “The woman she called me was afraid that she had pushed the wrong button.”

“A woman took me to her room and what I saw was so much more beautiful than I could ever imagine. She had very chubby legs and a short tail and the flattest face I’ve ever seen. I started crying when I walked into her room because she was so overwhelmed. It wasn’t at all what she had envisioned, but it was so much better.” Adds Franken: “A lot of people who saw her at the shelter said she was ugly, but I think she’s the most perfect cat ever.”

Over the months, Francisca and Bean strengthened their relationship and have now become inseparable: “It felt like home from the first second,” recalls Franken. “She lay down on the couch and took a nap like the couch was the most comfortable thing she’s ever experienced in her life.” After a long and much needed nap, Bean began to explore his new home and his true personality began to shine through.

Bean’s wistful gaze changed to something brighter, and joy showed in his eyes. He now even spends afternoons by the computer while Francisca works and on the occasions when she gets out of it, Bean runs to the window to follow her human until he loses sight of her.

“Bean is not a true emotional support animal, but she has definitely gotten me through some tough times already and I cannot put into words how much I love her,” she says. “She means the world to me and she deserves all the love after going through such hard things before she got to me.”