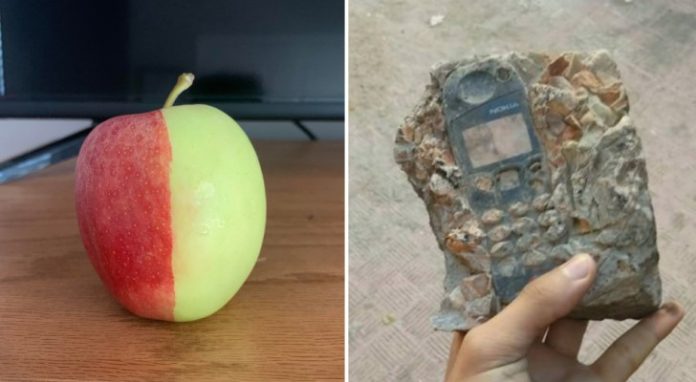 Is it all part of a logic that we sometimes can’t fully understand or do some things actually have no plausible explanation? A question that we have certainly all asked ourselves one day when faced with a particular object, situation or scene. In some circumstances we should probably realize that things are just as we see them and no matter how we analyze them, they remain a real mystery, meaningless or strange in nature! In order to understand what we are talking about, we offer you 16 curious images that will raise questions that, for the most part, will remain unanswered.

“This roll of toilet paper contains two cardboard tubes.” It almost looks like a face with a weird expression…

“When my curtain is opened just wide enough, my room becomes a giant pinhole camera.”

“McDonald’s burger preserved in resin since the late 1970s.”

“The frame for this painting in my parents’ house has an eye in the corner.”

“I found a small stone that looks like an egg.”

8.The Woman in the Hourglass

“The reflection of my lamp looks like a woman wearing a dress with her arm crossed over her body.”

“This is the apple my mother ate.”

“Outside the nursery there is a spot on the sidewalk that looks like a dog.”

“I added another type of soap to this nearly empty bottle and the original soap rose forming these little mushrooms.”

“The poster snippets on that staff front door look like Edgar Allen Poe.”

“That house in my neighborhood that has no windows.”

“Today I found a halfpenny.”

15.The Rainbow in the House

“My aquarium caught the sun the right way and made a rainbow on the couch!”

“Coffee happy to see me. Is that a wink?”

Did you like these pictures? Which do you find the most curious?