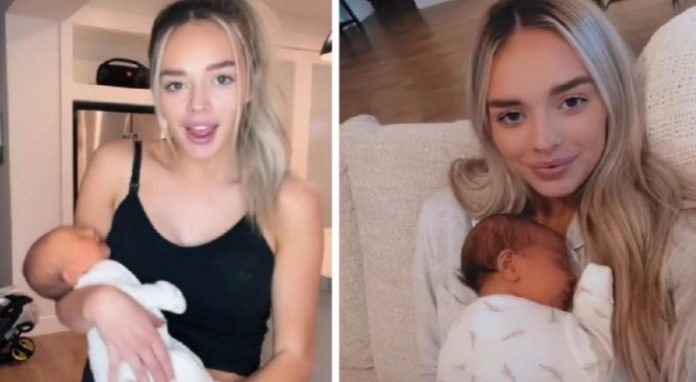 Choosing a first name for children is an exciting and sometimes also very difficult adventure. If both parents can’t agree on the best first name, for example, it can be difficult to find a compromise that makes them both happy. Then there are the friends and relatives who always want to have a say in all decisions, and there is the awareness that the name will be something the child will carry all their life. But after all, who among us has not wished at least once to be able to change his first name?

There are parents who make very original choices for the first name of their children, which earns them a lot of criticism from their friends, relatives and acquaintances. This mother’s story teaches us that what matters in such cases is to be convinced of her choice.

TikTokeuse Camille Munday shared her pregnancy and the birth of her baby girl with her followers on her account. But when she revealed the newborn’s first name in a video, she found herself having to defend her choice in the face of criticism from many. Indeed, the young woman named the little girl Lennon, a typically masculine first name . “I’m confused. Is Lennon a girl’s name?” commented one user. “I always thought it was a boy’s name.” Others were less tender with the woman, harshly criticizing her for her choice and assuring her that her daughter will resent her for it.

Many are also those who approved of his choice. “I only know girls with that name. I love it,” one commented, while another wrote, “I love her name and she’s gorgeous.”

The young woman was undeterred by the reviews and even responded to users with another video in which, to the tune of a theme song, she blows a kiss and then cuddles the sleeping baby in her arms. An elegant but incisive way to put the detractors in their place. Camille continues to share many videos about her life as a full-time mom in which she shows herself with an always happy and smiling Lennon.

We can only congratulate this mother for her original choice but above all for her firmness in standing up to those who tried to make her doubt her.