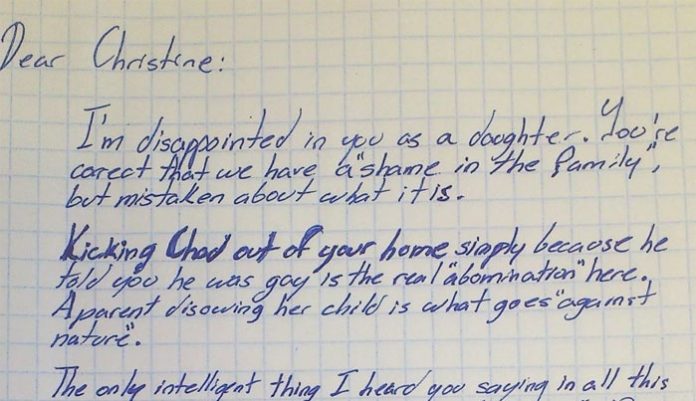 Even though this is 2019, there are still some people who don’t like to accept the LBGTQ community for who they are.

“We count on the narrative that young people are more progressive and tolerant,” John Gerzema, CEO of The Harris Poll, who undertook the survey, told USA Today. “These numbers are very alarming and signal a looming social crisis in discrimination.”

36% of young people have been upset by finding out that a relative was LGBTQ. It is really terrifying fear for them.

But, the older generation seems to be way more accepting with this handwritten letter which has gone viral. The grandpa showed his absolutely cruel daughter about the true meaning of unconditional love.

The son of Christine, Chad told his mom that he was gay. He was thrown with cruelty and rejection without any warm hug and understanding. He was also labeled as an ‘abomination’.

Chad’s grandpa was a completely different man and he wrote his daughter one of the most touching letters.

He wrote, “Dear Christine: I’m disappointed in you as a daughter. You’re correct that we have shame in the family but mistaken about what it is. Kicking Chad out of your home simply because he told you he was gay is the real ‘abomination’ here. A parent disowning her child is what goes ‘against nature’.”

“The only intelligent thing I heard you saying in all this was that ‘you didn’t raise your son to be gay’. Of course, you didn’t. He was born this way and didn’t choose it any more than he being left-handed. You, however, have made the choice of being hurtful, narrow-minded and backward.”

“So, while we are in the business of disowning our children, I think I’ll take this moment to say goodbye to you. I now have a fabulous (as the gay put it) grandson to raise and I don’t have time for heartless B-word of a daughter.”

“If you find your heart, give us a call.”

It’s a great response to a ruthless daughter.