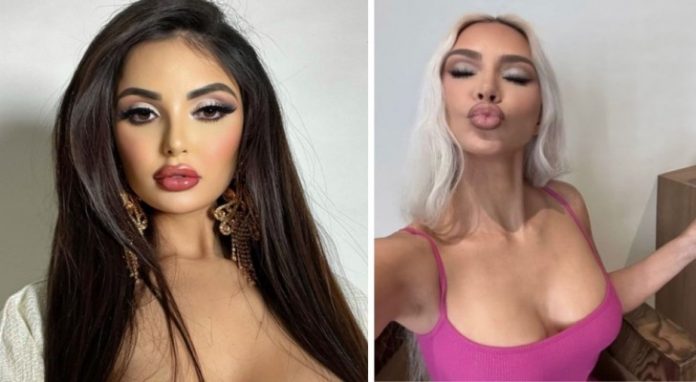 Each of us in life has a model to aspire to, to look like him in every way. Often, we even imitate him in our appearance, in our relationships with others, to the point of wanting to resemble him physically. However, this is possible up to a point, because it is always necessary to deal with our own body. At this stage, there are two paths to follow, accept yourself as you are and become aware of the impossibility of becoming the equal of your model, or seek help from specialists.

This model has chosen to become in all respects the equal of her famous inspiration, Kim Kardashian . Too bad that after spending large sums of money, when she had almost achieved her goal, she backtracked, trying somehow to regain her original appearance. Let’s see what happened.

Jennifer Pamplona is a 29-year-old model who has been inspired by American actress and model Kim Kardashian since she was young. Over a period of 12 years, she chose to undergo multiple treatments, about 40, and spent $600,000 to look like her. She thought that this way her life would change and she would feel happy. Unfortunately, these hopes will not be realized.

“People called me Kardashian and it started to get boring. I had worked and studied and become a businesswoman. I had done and achieved all of these things for myself, not to turn my life upside down. but I was only recognized because I had managed to look like my role model “

After achieving her goal, Jennifer realized that was not what she wanted, so she tried to retrace her steps.

The girl spent around $600,000 to look like her idol, but then realized that to be beautiful, she shouldn’t imitate someone, just be herself. That’s why she chose to undergo new treatments, which cost around $120,000, to regain her original appearance. After a long journey, she learned to accept herself .

Do you think she was right to do everything to become herself again or that she should have lived with her initial choice?