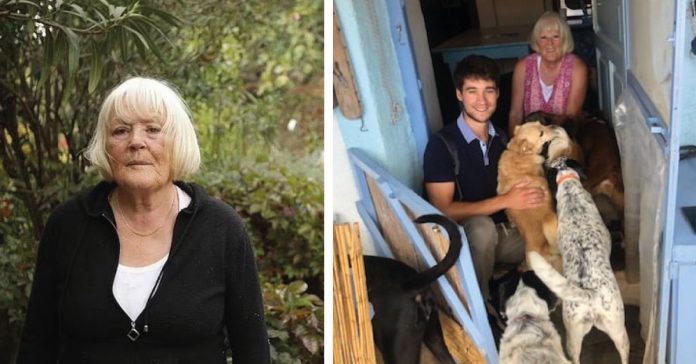 Well they say that spending money can be quite problematic or liberating, it depends on the position in which you find yourself; however, at the end of the day what matters most is how you use it and for what. In fact, many associations or organizations work thanks to donations from people who are looking for a way to help.

Sandy is an exemplary citizen, as she is an elderly woman who transformed her life by giving up many things and instead of wanting superficial things, she decided to dedicate her time and money to taking care of homeless dogs .

At just 21 years old, Sandy began the project that would change her vision of the world so much, the Magic Mountain Animal Sanctuary project in Greece. Her story has a lot to do with the absence of her brother, who took his own life after living in depression.

His father was an officer in the British Army and in his family there were several business lines of business, leaving the children in boarding schools. Sandy came to feel like his brother but instead of falling into a bottomless pit she decided to make an important decision and travel to Greece using much of his family’s money.

“The reason I came to Greece was because it was a way to break a class system that I really didn’t want to fit into. There were certain people I could date, but not others.”

During the trip, she realized several things, but the most important thing is that she wanted to provide care and protection to the animals that were on the street, so all the money she had and saved was used to build a shelter.

“It’s the old story, money allows you to do things, but happiness comes from helping these animals. Now I have to think of other ways to raise my money to support them, but I don’t regret what I did.”

Despite the problems that come with it, Sandy has spent years serving the community in the best possible way, and it is almost certain that thousands of puppies are grateful to her for helping them, loving them and trying to find them homes.