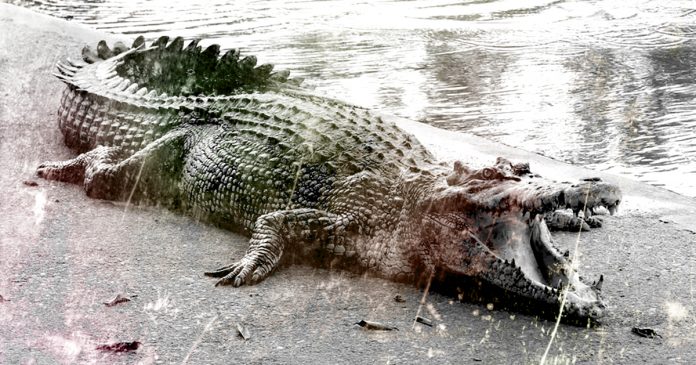 There is a well-known crocodile known as Gustave that inhabited Lake Tanganyika, the second largest lake on the African continent. This crocodile became famous for not very pleasant events: attacking human beings as if it were the Ted Bundy of the waters.

Gustave weighs more than a ton and is nearly 6 meters long and has been able to scare even the bravest of hunters. Every time Gustave was seen it was said that his kill count increased: there are even those who said that he reached 300 attacks and deaths in total.

This animal has been the subject of study for a long time: One analysis estimated it to be at least 100 years old. Although there are others who say that, just based on his dental arch, he is probably only in his early 60s.

The crocodile is also said to have 3 gunshot scars and others of unknown origin, which experts say are other marks of attacks by hunters.

Due to its size, this animal does not hunt smaller species for itself. It would be a waste of energy for Gustave to attack small prey to recover just less than the energy it takes to move.

This is why it ends up hunting larger animals, such as hippos or wildebeest, which become violent hunts and are not easy for the crocodile. However, it could also opt for less troublesome prey that would give it more energy: humans.

Gustave’s fame as a human eater grew in 2010, when Patrice Faye , a French-born hunter, attempted to capture this large species using specialized crocodile traps, which clearly did not work . In an interview for the BBC , Faye stated that Gustave is a highly intelligent specimen, which makes him difficult to hunt.

The story of the hunter, who exhausted his chances of capturing this crocodile, was recounted in a documentary called ‘ Capturing the Killer Croc ‘, which aired in 2014 and lists the various attempts to capture Gustave.

One of the attempts consisted of placing a giant cage , which also weighed about a ton and was 9 meters long. Different types of baits were installed inside the cage, however none attracted Gustave or any other crocodiles in the area.

In their last attempt to catch him before having to leave the country, the team placed a live goat inside a cage trap. A camera was left recording but was damaged in a storm. The next morning the cage was found partially submerged in water, however the goat was not there. Nobody knows what happened that night.

Giving up on hunting him down, Faye decided instead to track down Gustave’s positions . To achieve this, she decided to make the inhabitants of Burundi participants. She handed them mobile phones to give her information about Gustave’s sightings.

After analyzing the trajectory, and squaring the disappearances that occurred in the region, he concluded that in just 3 months 17 people were devoured. “ I calculated that if it had been killing people at this rate for 20 years, it would have eaten over 300 people by now ,” explains Faye.

In recent years there have been no known sightings of Gustave, so both Faye and the locals believe that the large crocodile has died, although in 2015 one said he had seen the carnivorous animal pulling a buffalo into the waters but no one else has confirmed this event.