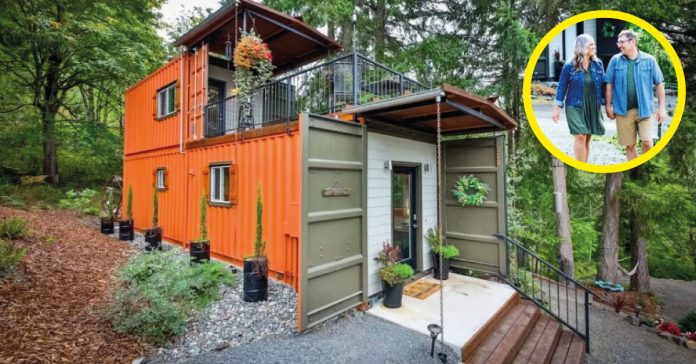 A love story that has overcome health and financial problems. Their house represents the steps they took to be able to live happily.

Jaimie and Dave Hinckle are an American married couple. After years of living together, and tired of living with debts at the top, they made a decision that would mark a before and after in their lives: sell their home to pay off the loans.

Of course, doing so left the need to find a new place to live. For this, they chose to buy a small two-hectare piece of land and build their dream house themselves.

This house is the fruit of their work and effort. Jaimie and Dave took it upon themselves to design everything according to their needs and desires. The result was a minimalist but beautiful house.

For the Hinckles, the goal was to finally live debt-free. Their old house was subject to a mortgage and before that they had rented their house. They needed to forget about the stress that comes with monthly payments.

But finally, after 5 long years of hard work, the couple managed to finish their new home and fill it with color, beauty and love. It can be said that they felt great satisfaction when they saw their result.

In early 2010 the couple began planning this project, mainly out of fear for their future. Although they had a large house, what they did not have was free time and the ability to save. They ended up spending a small fortune on the mortgage.

Your current home has a living space of 37 square meters. While this seems like a tight spot to many, it’s enough for two people, and the marriage says it has helped them appreciate what matters in their lives.

In 2014 they sold their home in Vancouver and used some of the money to pay off the remainder of the mortgage. They took what was left over and bought a small piece of land in Katama, Washington.

This was the beginning of his great adventure to find his new home. They negotiated with the town hall to connect their new property to the electricity and water network, later obtaining their occupancy permit. It was in June 2015 that they began to build.

Although they expected it to be a difficult process, what came next they never imagined.

While at his new property, Dave unexpectedly collapsed. He was airlifted to the hospital and was in the Intensive Care unit for five days.

There they discovered that he suffered heavy bleeding due to a stroke. During his hospital stay he could hardly speak. However, the idea of ​​building his house next to his wife kept him strong.

When he got out of the hospital he got a therapist who designed an entire therapy routine based on the built environment of his home.

After the incident, Dave was immobilized on the right side of his body. The process of building the terrace on the second floor was part of his rehabilitation and gave him a reason to continue.

Thanks to his sessions, Dave went from being unable to hold a hammer to regaining over 85% of the functionality of his immobilized side. Little by little, his dexterity and sensitivity returned.

By April 2016, the couple finished their new house. It is made up of 2 stacked cargo containers. On the first floor there is the kitchen, living room, bathroom and even a storage space.

A staircase gives access to the second floor, where the bedroom and a large balcony are located.

In total they invested 70 thousand dollars in the construction of the house and 65 thousand in the purchase of the land.

Although they spent more than their original budget, as they faced additional expenses for waterproofing and thermal insulation, they are finally debt-free and own their home.

If you want to know more about his house, you can visit his Instagram or you get to stay in it through Airbnb.