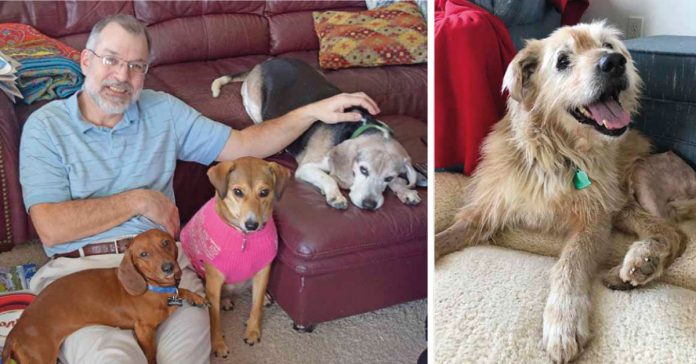 They say that of all animals, the dog is man’s best friend and with good reason, having a companion for adventures, rest and fun is a source of happiness and love. However, the fate of many canines is not always happy, there are thousands of abandoned animals, homeless or mistreated and it is increasingly difficult to save them all.

It is very common that at the time of wanting a puppy they choose the pots instead of the older ones, that is why many adult dogs or in their old age are relegated and homeless.

It also often happens that when dogs give up the best years of their lives, families give them up or abandon them on the streets because they no longer want to take care of them in their old age. Faced with this situation, a man decided to take matters into his own hands and opened a sanctuary for old dogs.

The shelter is inspired by his dog named “Shep”. Russell Clothier had the idea since he volunteered at places like this and saw elderly dogs having trouble finding a new home.

“The first eight to 10 years they’ve been in a house and then all of a sudden they’re abandoned, their house is gone,” Clothier said. “To be able to give them that feeling again and make the remaining years a golden age for them, we have this house that makes us all feel good.”

Translation: *After 7 years in a shelter, Barney has found his forever home! His foster mom adopted him. He is a single pet, and he is living the best life of his. Congratulations Barney, you deserve it!/ Facebook

With 1.5 hectares of property, the dogs have their own space to live together and try to find new families. “And if this is difficult, we can be their permanent and loving home” We focus on older dogs who have already spent time in a shelter or rescue, hoping to find a family. We do not accept dogs directly from the public,” Russell said.

The quality of life to which the dogs were accustomed is very different according to the history of each one, some can be aggressive when they first arrive at the shelter and others can be very withdrawn.

Shep’s Place offers them a better future at least in their last years, in addition to somehow looking for the dogs to find happiness with other families or right there.

“We are starting small, with a few dogs, and will increase over time. We need volunteers, so if you help sweet old dogs, you can join” according to their page.

It is important to mention that it is a place run by volunteers who spend their free time and help these little friends to have a better place, plus everyone is aware that sooner or later, the dogs they have will die, however, they deserve to have a place to call home.