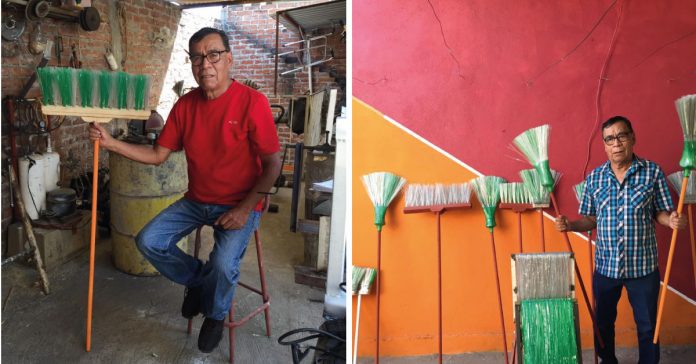 It started as a hobby that became a business that helps the environment.

Roberto Rea Martínez is a 73 -year-old man from Guanajuato, Mexico who makes brooms with PET bottles. The idea arose as a result of the pandemic since Roberto had to leave his job to safeguard his health.

Because she is part of the vulnerable population, she had to stay at home all the time during the C0VID quarantine. Roberto then wondered what he could do with all that free time and started looking for videos on the internet. He finally found something that caught his eye and he wanted to try it.

The man told the local newspaper El Sol de Salamanca that he found tutorials in Portuguese on how to make brooms from recycled materials. Roberto saw them over and over again until he learned the manufacturing process and then began to make his own brooms.

Using PET-type plastic bottles, Roberto has been creating strong and durable brooms since November 2020. In addition, it has a variety of shapes and sizes for all tastes and needs.

Little by little, Roberto perfected his technique and even made his machines work. He mentioned that these tend to be very expensive, so, also using recycled objects, Roberto made a fixed drill, a compressor and other devices. These machines allow you to speed up the brewing process. « I have already made one that will help me to make pet clotheslines too » , He commented.

For each broom, Roberto uses an average of 30 3-liter bottles.

The brooms are handmade, made by hand with 100% recyclable materials, which makes them a product that contributes to caring for the environment. In fact, Roberto doesn’t see his work just as a business but as a way to reduce pollution. He considers that his mission is to continue recycling PET bottles to give them a second life and reduce pollution.

The cost of each broom is 80 pesos and can be purchased through his Facebook page Brooms from PET “Robert” .

« I want to teach more people to do this type of work that is friendly to the environment and is very durable, I also invite people who have bottles that they no longer want to send them to me » , concluded Roberto.