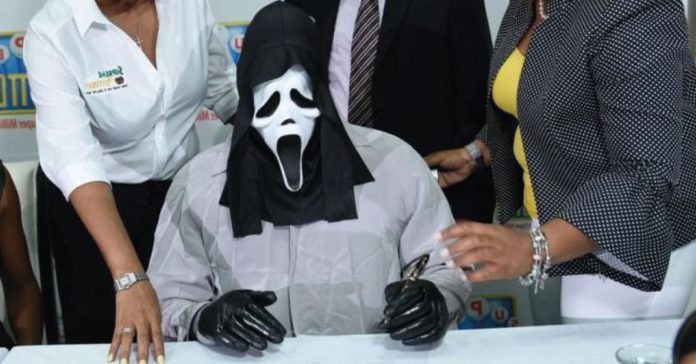 He chose the mask from the movie Scream .

Winning the jackpot in the lottery is an illusion that many people have but few can achieve. Around the world there are numerous stories of very lucky individuals who manage to become millionaires overnight; however, this stroke of luck can bring some misfortunes. That is, when suddenly there are several leading zeros in the bank account, everyone you know wants to get a little of it. That’s when conflicts begin.

To avoid these fights, some people devise schemes such as concealing their identity so that no one finds out that they were the winners. To achieve this, they decide to use curious costumes that do not leave a single hair loose that could identify them to the world.

An example of this happened in Jamaica , when a man came to collect his award dressed as a character from a horror movie.

The winner, whose last name is Campbell , said he did not want his family to borrow money from him. So he put on the iconic mask and the classic gloves and went to the Super Lotto offices to receive his check. He apparently wore the full costume from the movie series but wore a gray shirt over it.

This figure is equivalent to almost 1 million two hundred thousand US dollars, according to the current exchange rate. We want to believe that the subject was grinning from ear to ear the moment he finally got the amount in his hands. Although he told local media that when he found out he was the jackpot winner, he felt a little sick to his stomach and had to run to the bathroom.

The man stated that he already had plans for his newly acquired money. He said that he wanted to buy a house and expand his business since he did not like to borrow and now, he could manage his money in the best way.